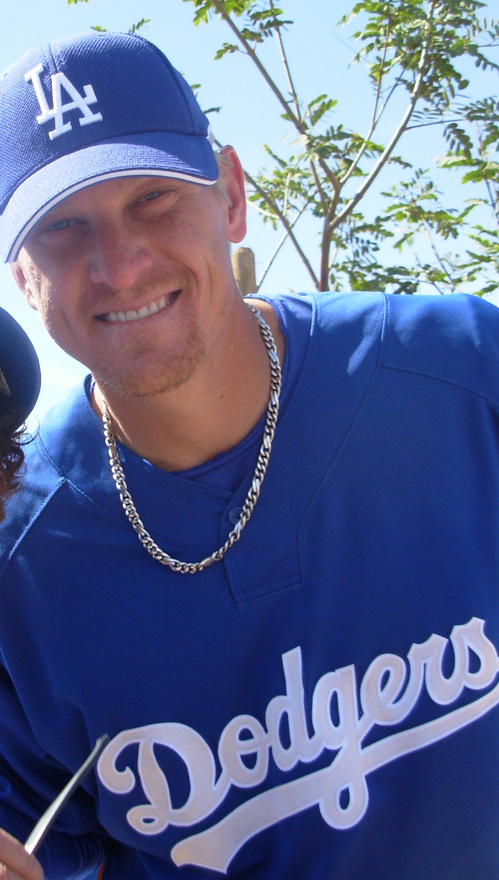 First of all, welcome back home Jeff Weaver! I know you’ve had some good games but also some rough times since you left the Dodgers, but I will always remember the game you pitched at Dodger Stadium when the Dodgers were honoring the Boys of Summer. It was….August 28, 2005 and the Dodgers were celebrating the 50 year anniversary of the Brooklyn Dodgers winning the World Series. I had a friend from Delaware who was in L.A. just for this event and 3 other friends from San Diego that had been looking forward to that day. . Needless to say I could hardly wait to get to the stadium that day.
.
From the time that I walked into Dodger Stadium, I could hear Vin Scully practicing over the mike for all the introductions he was going to be making. Afterwards the surviving members from the 1955 team were seated around the infield while in the background “The Boys of Summer” was playing. Vin Scully took his place introducing the players giving brief descriptions of career highlights. When he got to Sandy Koufax, well, Vin knew he would not be able to say much without having people applauding thru it so he said ” “Do I really have to go through this list of extraordinary achievements, or should I just let you show your appreciation?” Koufax, of course, got a standing ovation. Sandy, the humble man that he is, was gesturing “please, stop it”
.
Carl Erskine, one of the 1955 Dodgers pitchers, played “God Bless America” and the National Anthem on his harmonica just prior to the start of the game.  Johnny Podres, hero of the 1955 World Series who shut out the Yankees in Game 7, threw out the first pitch to Roy Campanella II, son of the late, great Dodgers catcher.
.
What followed was a classic pitching duel, scoreless baseball for 7 1/2 innings of play as Roger Clemens then with the Astros battled L.A.’s Jeff Weaver. Finally, the Dodgers were able to push a run across the plate in the bottom of the 8th inning.
.
Jeff: You rose to the occasion that day!! I hope you rise again to the occasion and have a great 2009!