Quick post so that I can head to Dodger Stadium for the ITD Tour.

There was a tribute to Michael Jackson at Dodger Stadium.  There was a moment of silence for Michael, Ed Mcmahon, Farrah Fawcett and Horace Lee.   I knew about the 3 but Horace Lee?  I was Oh No!   See, he was one of our elevator attendant.  When you see these people for every game, they become part of your extended family.  R.I.P to all of them.  I will miss seeing you on the elevator Mr. Lee.

.Pau Gasol threw out the first pitch at the stadium and usually we have a kid or several kids saying “Is Time for Dodger Baseball”  which is what Vin Scully always says at the beginning of games.  Well, this time it was Ione, this lady that was celebrating her 100 years!  Happy birthday Ione!

Congratulations to Andre Ethier who hit 3 homeruns last night!  The last Dodger to do that was Heep Sop Choi!

When I found out that Joe Pierre(Oldbrooklynfan) was at the game, I found out where he was sitting and I spent from the 6th inning on sitting with him on the field level.  He was sitting there by himself.  We both were keeping score so what I missed when I took the elevator from my seat to his, he helped me catch up.  Here is a picture of oldbrooklynfan: 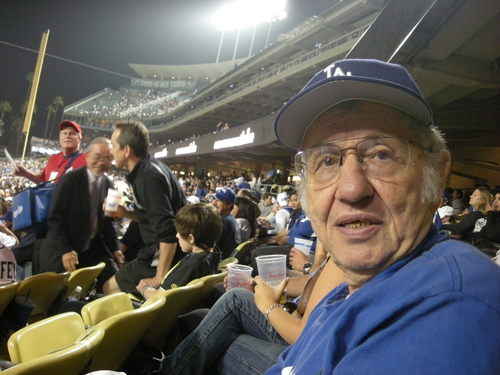 Almost six months, to the day, after Tim was named the Isotopes’ Manager, the Los Angeles Dodgers selected his son, Brett Wallach, with the 96th pick of the Amateur Draft.  Is all kept in the family!  Congratulations to Brett and his family!