A year ago Kenley Jansen was in the minor league catching.   Seeing his arm was better throwing fastballs than catching them, he was converted to a pitcher.   I actually went and pitcked him up in my MLB Fantasy team (Los Locos Azules)   but ESPN still has him as a catcher.

In the dugout with a big grin on his face, Clayton Kershaw was watching Kensley who had come in the 9th inning to save the game for Kershaw who had pitched 8 shutout innings.

The kid Kensley looked calm on the mound.  I on the other hand was nervous.  Kensley had made his major league debut the night before when the Dodgers used nine pitchers in the 13 inning game.

Kensley was going to face the 4th, 5th and 6th batters, of 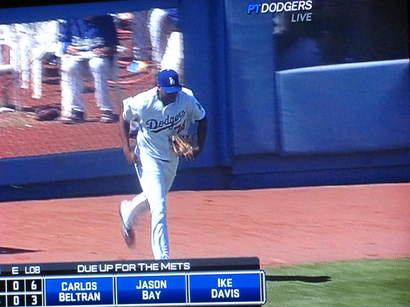 Here is the video I recorded:

Kershaw came out and gave him a big hug.  See, when Kershaw was in the Gulf Coast league, Kensley Jansen was his catcher.  “He had an incredible arm back then”  kershaw said.

Dodgers WIN!   and take the series against the Mets 3 games to 1.

Here is the post game interview with Kenley Jansen:

Dodgers are off today and start a three game series with the first place Padres.  Go Dodgers!

Len who I baptised “crazy Mets fan” came from San Diego to watch the game.  He sat in the right field pavilion for the AYCE (All you can eat).  I caught with him before the game and after the game.  This is after the game when the kids were allowed to run the bases.   Afterwards the Media softball game started.

Update:  I uploaded the videos.  Also ESPN has updated Kenley from a catcher to a relief pitcher!