Last year I  included the story about Joe Pierre that Rhett Bollinger of MLB wrote in this post the Power of a Blog   Joe was invited by the Dodgers to join the first ITD tour.

This year the ITD attendance (like the regular attendance) was smaller but we had a great time!   Several people (Including Josh Suchon of Dodger Talk) asked me why attend the tour when I’am always at the stadium and have taken the tour before (quite a few times).      I think it was mainly to meet up with friends and I can’t pass an opportunity to be at my Blue Heaven on Earth.
Do you find that when re-watching a favorite movie that you notice things that you missed before?  Well, the same thing with taking the tour.   They all have brought something different and heck I don’t get tired of doing it.    A friend of mine who is a Cardinal fan will be visiting in December.   If she wants to do it,  we’ll take the tour.
Thank you so much Josh Rawitch for taking the time to be our tour guide!    One usher that works in the dugout said to me “Why was Josh guiding the tour?  He does not do that.”   I said “because we are special!”
Here are some pictures.
Carol and her husband along other fans sitting in the Dodger dugout 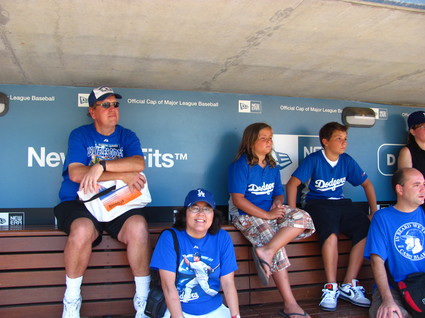 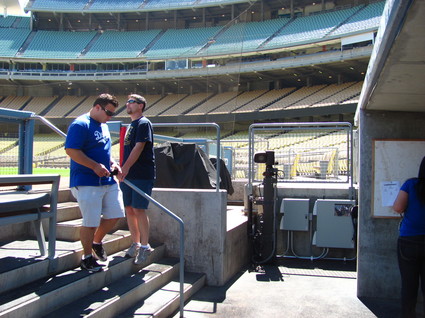 The closest toilet to the Dodgers dugout.  LOL.

To the right is the cage where Kirk Gibson hit the most dramatic homerun in Dodger history.  This image of Kirk Gibson pumping his fist along with Mel Didie’s quote was added afterwards.    Kirk Gibson was pleased when he saw it.

I am glad we ran into Manny Mota so that I could tell him what a wonderful job he and Pepe Yniguez are doing on the Spanish TV station.  Thank you so much Manny for spending time with us.  Muchisimas gracias Manny!

I am taking a picture of the mirror image.    Look at the guy with Kershaw’s number 22!  I like how that came out.  Number 22 by the way is the number I came in at in the latest MLB fan blog ranking!    Thank you all that visit my humble blog! 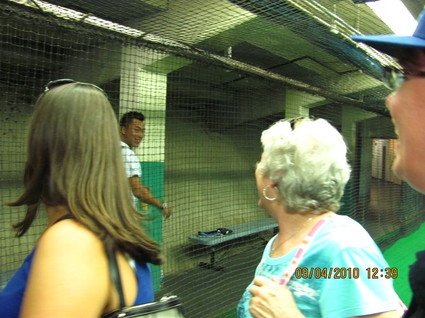 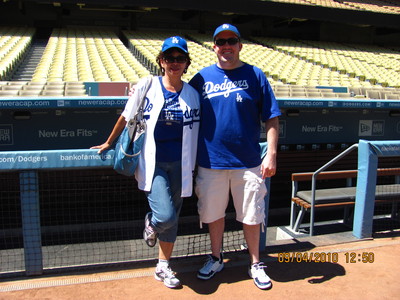 Ok, I am going to have to put some of the other pictures including Mike’s beautiful wife on another post.    I am hungry!  and I need to get ready for the ballgame.

Game on ESPN today.  No Vinny 😦