Labor Day!  What better place to spend the day than at Dodger Stadium!   My friend Lorena was back after being sick for a couple of days!  She brought her two nieces.  Victor and I met them there for early batting practice.   Rosie and her sister Blanca were also there early, as well as Renee and Desiree so we sat there watching batting practice and talking.

See what a beautiful day it was on Labor Day! 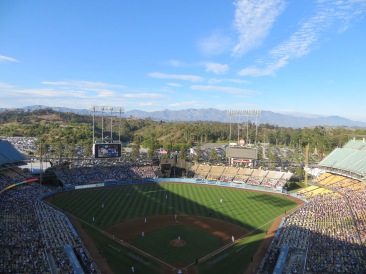 Cochito’s first hit of the game.   He would go on to collect four.

I keep seeing some search hits in my blog asking “what does Cochito means?”   It means little pig.     The actual name for little pig is “cochinito” but I guess that is a shorter name, Cochito.

Hanley Ramirez after he hit his homerun on a fly ball to center field on the first pitch.  Note he is on his way to do the “I See You!” 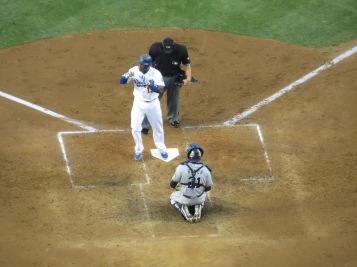 Remember when Ethier had his walk-off walk on April 13, 2012?  No walk up this time but he did tie the game in the 9th with a solo homerun!

The players applauding Cochito Luis Cruz getting another hit!  and the fans chanting cruuuuuuuuuz!

Cochito gets the 4th hit of the night!

I asked Pepe Yniguez thru twitter if he could ask Cochito when is his dad going to come from Mexico to see him play.  Pepe answered that Luis Crus will bring his dad as soon as he gets his dad’s passport in order.  It could be before the month ends.

With two outs in the bottom of the 11th inning, the score tied 3-3 and Ethier and Cochito on base, A.J. Ellis came to bat

A.J. Ellis gets a walk-off single to right field  to score Ethier! 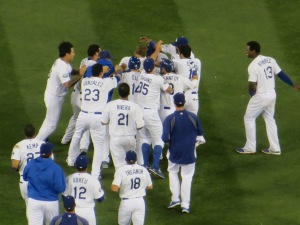 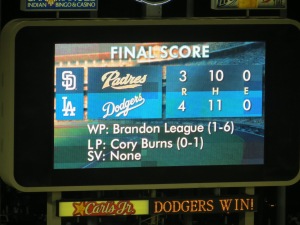 And for the second day in a row we have a Walk-off and Steve Lyons getting soaked with whoever is being interviewed.  The night before it was Adrian Gonzalez.  Labor Day it was A.J. Ellis.

So happy to keep on singing “I LOVE LA!”

Thank you Lorena for taking pictures for me!