They both studied at  Claremont McKenna  College.

A friend told me that there was going to be a discussion on the business of Baseball  with Wes Parker, Jim Colborn and Scott Akasaki on Monday November 19.     I checked Google map to see how long it was going to take me to get there.  Google map said 1:15  minutes in current traffic.  I did not believe it as it takes me 1:10 minutes to get home which is 45 miles away.  From Chatsworth to Claremont there are 61 miles.    It actually took me TWO HOURS & 45 MINUTES!   Several times I thought about turning back and going home.

I am glad that I Char parked next to me as I probably would have wasted more time looking for the place on campus.    The event was already in progress  and Dodgers traveling manager, Scott Akasaki was speaking.

Before Scott introduced Wes Parker he asked “Who hit for the cycle after Wes Parker had done it for the Dodgers?”   Scott picked Char to answer the question.  She immediately said “Orlando Hudson”   Scott rewarded her with a Wes Parker signed baseball.   She was ecstatic!

After the event was over Char shared a cute story wtih Wes Parker.   She said that when she was 12 she wrote a snail mail to Wes with questions for a career assignment and he replied.  She said she lost the index sized postcard, but the answers were neatly typed.   Mr. Parker said “Oh yeah!  I replied to all my fan mail!’   Love Wes!   Here he is with his old coach! 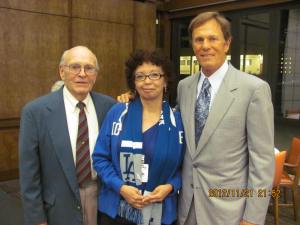 Scott gave a lot of baseballs.   There were more signed baseballs from Wes Parker.

Who was the Brewers first 20 game winner?

Jim Colborn.  Jim asked that question.   Jim Colborn has a  a good sense of humor.   He had us believing that Tommy Lasorda was in attendance.     Jim also threw a no-hitter against the Kansas City Royals.

Scott had a box full of signed baseballs!   One of the questions he asked “Anyone  Cuban descendant or from the Caribbean?”   I put my hand up that I was from Central America so I got Yasiel Puig signed baseball!

It was a long day but I am glad I went.  Thanks Char!