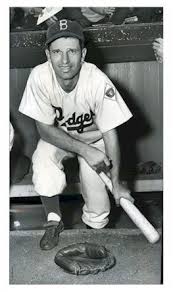 During a 17-year career Andy Pafko was one of the handful of players to appear in four World Series with three different teams, the 1945 Cubs, 1952 Brooklyn Dodgers, and the 1957 and 1958 Milwaukee Braves.

Andy’s first year with the Dodgers ended on a sad note. That’s him in left field, dwarfed by the huge wall at the Polo Grounds, looking up in vain at Bobby Thomson’s pennant-winning home run off Ralph Branca. His luck changed in 1952, however, when he got into his second World Series, playing in all seven games for the Dodgers against the Yankees.

Andy retired as a player after 1959 and coached for the Braves from 1960 to 1962. He began his minor league managerial career the following year, and by 1968 he had skippered teams in New York, North Carolina, and Florida for the Braves organization. He did some scouting for the Braves for a few years after that and then he his wife moved to Chicago.

Widowed in 2002, Pafko is active at charity events, golf outings, baseball appearances and banquets, and is the 2005 President of the Chicago Old Timers Baseball Association. He attends Cubs games frequently and shuns the spotlight, but is usually hounded by fans and media. He recently found time to write the foreword for “Wrigley Field’s Last World Series: The Wartime Chicago Cubs and the Pennant of 1945,”