One of the things I looked forward to every year is getting that special box from the Dodgers in the mail with my season tickets. I was always giddy with  anticipation when I got that call from home that a package had arrived from the Dodgers.  I would wonder “How do the tickets look like this year?”   Would they have current players pictures or past player pictures, pictures of Dodger past history?  No matter what the Dodgers picked, I liked them.  They were my special tickets!   One of the many themes I like are “Great Moments in Dodger History.”

The minute I got home I would grab the box look at it some more, shake it and hastily  opened it. Once the box was opened, I would smell the tickets just like in the movie “Fever Pitch”    “They smell like World Series to me” I would tell my brother Victor year after year.

Before I became a season ticket holder for a second time, I had a mini plan package with my friend Stephanie.  Once the tickets arrived, we would get together for dinner and spread the tickets on the table.  If she could not attend some games, I would give her a choice of another date.

Prior to home stands, my brother Victor would separate the tickets for the upcoming home stand.  He would hold a set in each hand and ask me ‘left or right?”   I always ended up with tickets with my favorite players either by choosing right or by bullying him.

Afterwards the tickets went  into our handy holder that the Dodgers would sell at Dodger Stadium.

With this no paper season, I need to either print my tickets or show my phone so the Dodgers can scan this virtual ticket.  I don’t like it.  I don’t have a printer at home.  All my printing I do it at work or at a library.   My brother does not have a phone so he needs to print the ticket.

One of the things I don’t like when I go on road trips is having to print my own tickets or scan them from my phone.   I was in Seattle when the Dodgers got no-hit.  I saved my printout but as I was leaving the stadium I noticed two tickets on the floor.  I was thinking “Why would anyone not want to keep such a special ticket to commemorate the no-hitter?   I picked up the tickets. 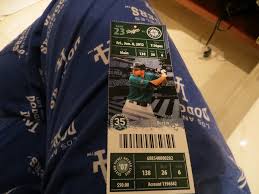 Below is my ticket from Opening Day 1981 when Fernando had to step in and replace Jerry Reuss as the Opening Day pitcher.    It is not on this picture, but Fernando signed it for me.

Another thing I do with the tickets is attach them to my scoresheet.

It is not going to be the same having to scan the ticket from my phone or printing those generic papers.

I was going to post some pictures of my tickets but they are at home and i am having a hard time uploading pictures.