Early Saturday morning, Lorena, Rosie, Josie and I headed to Arizona to what else?  Watch the Dodgers.  For reading material I took the LA Times that luckily it had already been delivered.   I also took the latest copy of the Baseball Research Journal (Spring 2014)  Allan Roth is on the cover.  One of the articles in the journal is titled “Was There a Seven Way Game?  Several sources list more ways but Paul Hertz who wrote the article says in his family there are seven.  I started going over them in my mind and I missed one.  Hit, walk, error, fielder’s choice, hit by a pitch, dropped third strike, and defensive interference.  Hertz refers to this seven ways “Ways.”

Paul Hertz examined the Retrosheet database and found that from 1945 to 2012, there have only been six major league games where batters reached first base by all seven Ways.

With the help of Retrosheet, Paul Hertz says that from 1945 to 2012 there have been only six games where batters reached first base by all seven Ways.  Those six games are: 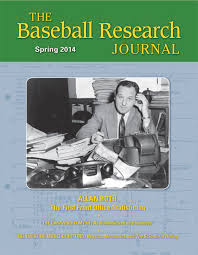