It is a sad day today hearing that Bobby Welch passed away.

I did see Bobby strike out Reggie Jackson but it was not until the Summer of 1981 that I became a big Bobby Welch fan.

1981 was the first year I had season tickets. I had my ticket in the Loge level, aisle 3, row N, seat 3. I never collected autographs or took pictures with players. I just went to my seat, watch the game and left when the last out was recorded. Back then I was very shy. I was teaching myself how to follow the game and I thought myself how to keep score by looking at the sample in the Dodger magazine.

As Camera Day was a few days away, I decided to go and see if I could find a greeting card with some encouraging words to give to Davey Lopes. The day before camera day I went to a local Hallmark store and read many greeting cards trying to find some that had some encouraging words for Davey. Some I found too mushy, not appropriate. I finally found one that I thought was respectful and appropriate.

Camera Day had arrived so I headed to Dodger Stadium with my Kodak camera and a greeting card in my bag. I took a spot close to the dugout on the field behind the roped area. I was taking pictures and waiting for Davey Lopes to come out. But the last players were coming out so I realized he was not going to come out. When I spotted Jerry Reuss, I asked him if he could give Davey a card. Reuss said No, can’t do it…not allowed or something like that. The last guy coming out of the dugout was Bobby Welch. I asked him and he looked at me and said “I sure will” From that day on, I was a big Bobby Welch fan! 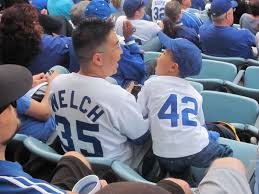 The Dodgers won the World Series in 1981. Some time in November of 1981, I received a postcard signed by Davey Lopes thanking me for my support. I still have that postcard.

I followed Bobby’s career, I was sad when he was traded to Oakland and also when I read that the was battling alcoholism. I was happy when he was doing well on the field and off the field. The next time I saw him was in 2008 when Dodgers were celebrating Dodger decades with luncheons with players speakers at Dodger Stadium. I attended the 60’s, 70’s and 80’s. Bobby was part of the 80’s group (he could have been on the 70’s) The 80’s luncheon was in the Dodger Club level restaurant. It is too bad that when talking about 1988, Bobby Welch was with Oakland.

The next time I saw him was at Camelback Ranch. I believe it was 2009 when the Dodgers had a Women Baseball clinic. I took this picture with Bobby.

The next time I saw him he was at Dodger Stadium. I was already in my seats in the Top Deck when I saw him as part of alumni players on the field prior to the game. I made my way down all the way to the field level and caught up with him as he was coming back to the field level. I talked to him and told him again that he was my favorite player. He signed my baseball.

My friend Kent who I met in 2012 at the SABR convention in Long Beach is a Dodger fan and a Red Sox fan. I started talking to him about Bobby Welch. He told he had his book “Five O’Clock Comes Early” I told him that I had heard of the book but that I never read it. He sent it to me in the mail. I read it but I kept it a little longer hoping to see Bobby so he could sign it and send it back to Kent. I did not have the book with me last time I saw Bobby at Dodger Stadium. Rest in peace Bobby! 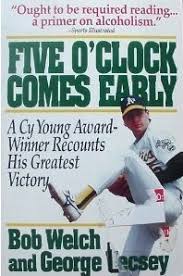