I remember when Clayton Kershaw won his first Cy Young award.  The Dodgers issue a last minute invite to Dodger Season Ticket Holders for the Clayton Kershaw Cy Young News  Conference and I got to go!

From the Dodgers Newsletter to STH back in November 2011:

This is what it says:

Dodger Season Ticket Holder Emma Amaya was constantly checking her phone on Nov. 17 while in a company webinar. She knew this was the day that the National League Cy Young Award winner would be announced. So every pocket of time she could find during the webinar at her company office in Chatsworth, she’d keep checking the news and her email. The news came around 11 a.m. that Clayton Kershaw won the Cy Young Award. Then, moments later, an email came through from the Dodgers inviting her, as a Season Ticket Holder, to come down for the news conference behind the mound at Dodger Stadium.

Without a car and still at work, she asked her Human Resources department if she could leave and take the company car because she had “an emergency.” Luckily for Emma, they allowed her to do both and she made her way to Dodger Stadium for a first-of-its-kind invitation extended only to Season Ticket Holders.

Mixed in with the media, Dodgers Matt Kemp and James Loney, legends like Vin Scully, Fernando Valenzuela and Don Newcombe, and other Season Ticket Holders, Emma sat with the group for a rare experience. Kershaw stood in front of a podium as media asked questions. Then Emma stood up and asked her own question of the 23-year-old lefty. After the Q&A broke up, she took pictures with Kemp, Loney and Valenzuela and chatted all of them up.

“It was awesome being back there to be part of such a special day,” Emma said. “We were so excited, so happy to share it with Clayton. It was incredible — a day we’ll never forget.”

The 2012 season will mark Emma’s eighth consecutive year as a Season Ticket Holder. She proudly cheers from her seat in Section 3 on the Top Deck. But it’s not just during the season that she can be on hand for special Dodger moments.

“All of us felt very special,” she said of taking part in the Kershaw event. “We felt privileged.”

No invitation this time but that is OK!   Enjoy your third award kid! 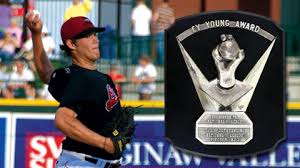