I was at the stadium last night and I was asking “Why the low attendance with the Dodgers in first place with the best record in baseball and Kershaw on the mound?” Well, I had forgotten the Lakers were playing. I kept getting quite a few tweets “Laker’s in playoffs” But Magic Johnson showed up at Dodger Stadium! I had my scorebook signed! I had him signed it on the sheet of the first game the new ownership took over. Stan Kasten had signed a few days earlier. 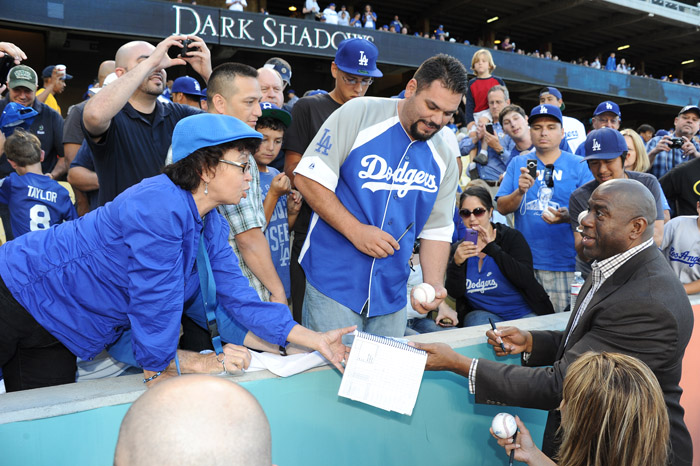 Dodgers have a five-game winning streak going. Also they had four sweeps this year. Is only a two game series with the D-Backs so will tonight be five sweeps? I will be ready with my little broom. The people sitting in my section look for my broom. They look back and ask me “Where is the broom?’

I forgot it once time so I had to improvise and make one out of paper napkins.

MikeSciosciatragicillness got a campaing going to vote for AJ Ellis to the Allstar! Great idea! Here is the buttom they created and the hashtag #AJ2KC.

I was checking the scoresheet from my 1981 World Series program.  Fernando Valenzuela pitched that game!  it was game three at Dodger Stadium.

btw, the back of my shirt  says Scully” and it has a mike.

The program cost me $3 back  then.

the scoresheet.  Jaime always signs with his HOF year (1998).  Fernando signed above.

The 1981 NL All-Stars.  I miss the Expos and the Pirates unis.   Very colorful picture.  i counted six Dodgers and only one Giant (Vida Blue). 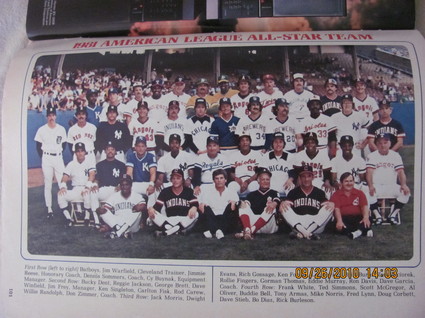 I can’t believe next year it will be 30th anniversary of that World Series.   It was a nice trip down memory lane.

Thank you National League players for coming thru and giving the Senior Circuit bragging right!

I could have used a real vacation day today of just resting after the last five hectic days but I had a great time,

Tuesday 7/13.    Checkout FanFest (lots to see) then lineup outside of convention to wait for Player parade.   After parade, realized I lost my car keys.  Checked with security, information, front desk and no sign of keys.   My friend Lorena came to pick me up to head to the game after she finished watching the parade from her end at Disneyland.  Brother Vic timed it well to bring me the the extra key I had left at home.

Wednesday 7/14. Exhausted but back at work.

Here are some pictures:

In a prior post, I had mentioned that Red Sox Mickey was on the DL.   He was brought back to FanFest after his trip to the mickey hospital.    Note how Red Sox Mickey has his left arm all bandaged and he has a hot water bottle on top.  Poor mickey.

Here is the news flash  from MLB informing everyone that Red Sox Mickey was starting his rehab assignment at the FanFest on Friday and possibly would be ready for the All-Star game.

Unfortunately Kansas City Royals Mickey could not make it on time.

There was a wax figure of Tommy Lasorda.  Have you ever seen him this skinny?

Outside of the convention center was the Hilton and the Marriott hotel.  The Hilton has the American League Mickey

The Marriott has the The National League Mickey!

After our final volunteering assignment we were given an All-Star baseball.   After three days I was really tired but I would do it again.  I met lots of fans, little ones and big ones and many other baseball fans that volunteered.

From the Hall of Fame section:. 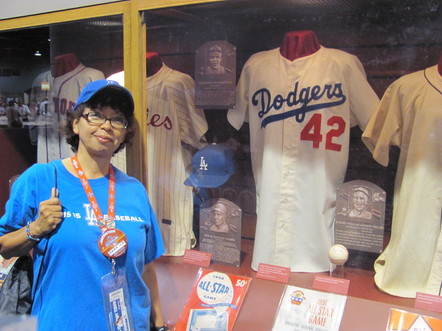 I did not want to blog after the Dodgers lost that heartbreaker in the 9th to the Yankees.   We all left the stadium so demoralized

Hey Torre:  Did you fall asleep in the 9th?

But we won last night against the hated ones on my birthday!!   YEAH!!

Young John Ely goes tonight against Cain.  Let’s see what this game brings us.   Truebluewill was reminding me of the Dodgers record against the NL West!  19-5!    We swept the Padres earlier in the year so yeah let’s play the NL West! 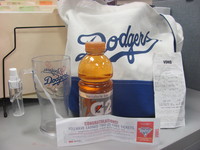 I went to the Vons and noticed this special last Sunday.   Checkout the voucher!

If you spend $20 in qualifying Pepsi products, you can earn two free tickets to the MLB All-Star FanFest.    The tickets cost $30 each so this is a pretty good deal.   Thanks Pepsi!

I don’t care for Pepsi, but I bought products made by Pepsi like Gatorade and Aquafina water.  If they don’t call me to volunteer for the Fan-Fest, then I already have a voucher for tickets.

Woohoo!!  I just got the email that says “Congratulations!’  You have been accepted to the 2010 Major League Baseball All-Star  FanFest Volunteer Team!