Woo-Hoo! The Dodger promotional schedule is out! 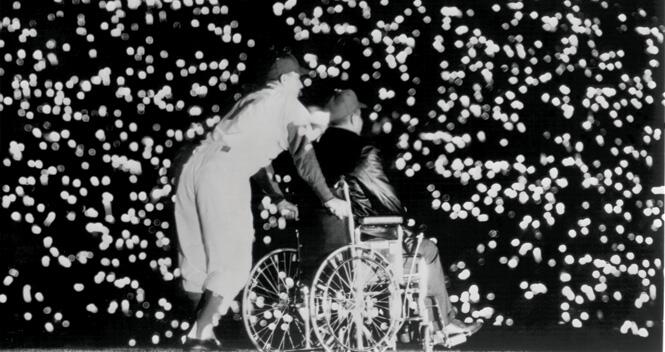 Looking forward to this bobblead of Pee Wee Reese & Roy Campanella, the Babe Ruth one too and I wonder who will get  “the Fan vote bobblehead.” on June 26, two days before my birthday.    the All Times’ Game will be on Saturday May 10

The 30 club of Garvey, Reggie Smith, Baker and Cey get a bobblehead.

What a great opportunity to visit the Sport Museum in Los Angeles when the SABR Allan Roth Chapter scheduled the October 26 meeting there! I invited Lorena and Rosie to come along. The first words I heard Lorena say was “WOW!” Yeah, my sentiments too. What a great museum! I had seen part of Gary Cypres collection at Dodger Stadium and also at the Folks museum when both the SABR local chapter and the Baseball Reliquary had meeting events there last year, but to see the 30,000 square foot warehouse that is home to the is amazing.

Gary Cypres.  I did not see him at the museum but I had met him at the Dodger FanFest back in January when Mark Langill, Dodger Historian introduced me to him.

I did not have time to completely see all the collection but here are a small portion of pictures from the Sport Museum: 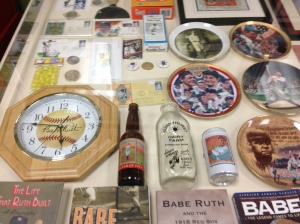 Part of the Babe collection.  There was way more than I took pictures 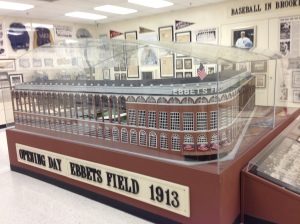 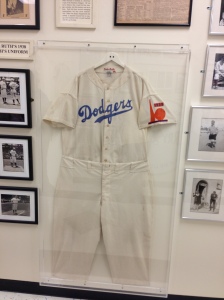 I think I will do a 2nd part of this post.  Still got more pictures and I have run out of time.  I also want to talk about our speaker Jay Johnson and the two presentations we had that day.   I had a great time at the SABR meeting and checking out the museuum.

Have you ever noticed the Sunset Boulevard sidewalk plaques in Echo Park?

I first noticed them a  few years back when I was meeting friends at Barragans on Sunset boulevard on a Sunday before the Dodger game.

The plaques are all sports related.   I took pictures back then but never used them in a blog post.    I asked several people  at the stadium, and other people like Terry Cannon but no one could tell me anything about them.

When did they started appearing?   Who put them there?

There are not all baseball.  Here is Elgin Baylor’s plaque 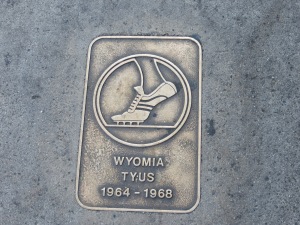 But who put this together?

Then I found this plaque

Castle happened to be the owner of both a small camera shop and a big dream.

His dream was to improve the struggling commercial center of Echo Park along Sunset Boulevard, maybe even transform it into a tourist attraction. With Dodger Stadium just a 10-minute walk up the hill, what better way to do that, he thought, than to shine some reflected glory of sports heroes down on the relatively unglamorous street of shoe stores, banks, bakeries and restaurants?

So, at Castle’s urging, the City of Los Angeles in 1974 declared the 10 blocks of Sunset Boulevard between Elysian Park Boulevard and Alvarado Street to be the Avenue of the Athletes, allowing sidewalks to be dotted with tablets bearing the names of superstar jocks. Castle himself hardly fit that image: At the time, he was a short, slow-moving, elderly man.

Castle, who also worked as a photographer for the Dodgers, got the team and other local merchants to back the project financially. The first plaques were laid in concrete in 1976 during what was supposed to be an annual ceremony.

But Castle died two years later and the Avenue almost died with him. The ceremonies stopped and the designs for the plaques were even lost for a while. It was not until 1980 that the Echo Park Chamber of Commerce was able to revive the project, which even its biggest boosters concede has yet to fulfill Castle’s dream.

Fred Claire is quoted in the article :

“The most important thing is whether you are really going to try to improve the area,” said Fred Claire, executive vice president of the Dodgers and a member of the plaque committee. “Andy Castle dreamed that it could be clean, that it could be free of crime. What the reality is, I don’t know for sure. But his dream lives on.”

Castle gets his plaque:

To symbolize that, a plaque bearing Castle’s name was laid in concrete last week in front of the store he used to own at Logan Street and Sunset,  Castle’s shows a camera.

What a treat to go into the Twins Archive room.  We met the Twins curator Clyde Doepner!

I would love to go thru stuff here!  Those Sporting News would be a nice start.

There is all sort of treasures in this room

A Hole in One by plaque by Harmon Killerbrew

Thanks Clyde! I think this would be a great job.

Now we are the Visiting Clubhouse.

Are you confy Kent?

The Babe when he played for the Saint Paul Saints

And here is Walter Alston and Roy Campanella

Ted Williams played for the Millers

OK…that is enough pictures for a post so one more coming up with pictures at the Throwback game.

Thank you all that helped be #26 in the latest ranking!

Only two players have worn #26 in Dodger history. One of them is Hall of Famer Henry Heinie Manush!

Heinie Manush was born in Tuscumbia, Alabama . He was elected to the Hall of Fame in 1964 by the Veteran’s committee. He passed away in May of 1971 at the age of 69 .

Heinie Manush ended his 17-year career with a .330 batting average!

He hit .378 to win the 1926 American League batting title, edging out Babe Ruth on the final day of the season by going 6-for-9 in a double-header.

In 1928, Manush hit .378 again, but lost the batting crown to Goose Goslin’s .379 mark. After their battle for the 1982 batting crown, Manush and Goslin playfully made an annual bet on who would record the higher batting average. The loser would have to pay the winner $50 and buy him a new suit. Manush collected on the bet 5 times while Goslin collected 3 times.

He finished second to Jimmie Foxx in 1933’s race for the batting title, but his league-leading 221 hits and 17 triples paced the Senators to a pennant.race.