After the Dodgers got eliminated by the Cardinals, I was feeling very down.   I had driven to work because I was planning attending the Baseball Reliquary event at the Burbank Library  “Dock Ellis and the Swinging 70’s.”    I drove feeling depressed and not sure if I wanted to be around people but I drove there getting there just before the event started.

From left to right, Baseball Reliquary Executive director, Terry Cannon with the panel of speakers of Jeffrey Radice, co-producer and director of “No No: A Dockumentary”; historian and journalist Dan Epstein; and former big leaguer Jim “Mudcat” Grant.

I am so glad I went!   I could have listen to these speakers for hours, especially Jim Mudcat Grant   Mr. Grant has a bank of stories to tell and he tells them with such charm.   I was glad to go out to dinner afterwards because I ended up hearing more stories from Mr. Grant.   He was telling me about his brother Julian playing in Monterey, Mexico and how everyone used to call him “Julio.”   One time they got into a taxi, he was sitting in the front and his brother in the back.  The taxi driver asked him “Are you Julio?”   He said no, and pointed to his brother and the back.  The taxi driver was driving with the windows open yelling to people “Hey, this is Julio!”

Mudcat told me about an exhibition games in the south, They had landed in New Orleans, where blacks were not permitted in the airport lobby or to wait for cabs alongside whites.  They had to wait on a grassy hill to wait until a black cab would arrive. The luggage would invariably be brought to the white hotel.   The black players would get to the homes where they could stay.  They would draw straws on who would go to the white hotel to retrive their luggage.   In once such incident, the Indians were playing the Boston Red Sox in New Orleans  and Mudcat’s straw had come out short.   When Grant went to retrieve the luggage, he was stopped by a hotel baggage handler who refused to allow him into the hotel. He told him that blacks had no business entering. While discussing the situation with him, Grant saw Ted Williams entering the lobby. Williams walked over to Grant and asked what was happening.

“Well, you know we cannot stay at this hotel,” said Grant.

“I know. It’s a terrible shame,” said Williams. ”This man will not let me come in to get my bags that were sent here,” said Mudcat.

Williams replied, “He’s right. You shouldn’t be going in to get those bags. He should get them and bring them out to you!”

Another of his stories was when he was in Cuba.   He was in a car with Tommy Lasorda and another black players.   The police stopped him and Tommy told them “Let me do the talking.”   Well, Mudcat said that they ended up in jail!   They jumped on Tommy in jail and asked him “What did you tell them??”

Here are pictures from the event:

Mudcat signed my baseball. Loved the hat he was wearing!

Part of the Baseball Reliquary exhibition at the Burbank Library

part of the pictures Mudcat was showing us.  In the picture Mudcat, Larry Doby and Satchel Paige.

If any of you want a break from the playoff, head over to the Burbank Library.  Here is what Terry Cannon of the Baseball Reliquary posted about the event:

MUDCAT ON DECK: Need a break from the baseball playoffs? If so, the Baseball Reliquary might have just what the doctor ordered – unless, of course, you’re a Detroit Tigers fan, which would mean you are likely in need of some psychotropics right about now. For all others, we invite you to beautiful downtown Burbank this Tuesday evening, October 7, at 7:00 p.m., where the Reliquary will host a panel discussion in conjunction with its exhibition, “I’ll Take You There: Dock Ell…is and Baseball in the Swinging ‘70s,” at the Burbank Central Library, 110 N. Glenoaks Blvd. Panelists will include former big leaguer Jim “Mudcat” Grant, who roomed with Dock Ellis during the 1971 season in Pittsburgh; Jeffrey Radice, co-producer and director of “No No: A Dockumentary”; and historian and journalist Dan Epstein. Following the panel, Mudcat will sign copies of “The Black Aces” and Epstein will sign copies of “Big Hair and Plastic Grass: A Funky Ride Through Baseball and America in the Swinging ‘70s” and “Stars and Strikes: Baseball and America in the Bicentennial Summer of ’76.” More info: https://www.facebook.com/events/710151262394199/. (Photo: A couple of great dudes and Shrine of the Eternals inductees, Dock Ellis and Jim “Mudcat” Grant, in Bradenton, Florida for the Pirates’ spring training, 1971.)

Me, I am a little depressed after the Dodgers got eliminated today.  I was planning on going but I don’t know.   Maybe I will show up or just go home.
I am here!  I am so glad I showed up to this event!   Wonderful stores by all, especially Jim “Mudcat” Grant.

If you are a baseball fan, I highly recommend you to join the Baseball Reliquary.   The annual fees are $25.  Go to http://www.baseballreliquary.org for more information.

Like many Baseball Reliquarian members I look forward to the yearly Induction Day.   Here are some of the pictures I took Sunday 7/20/14:

Reliquary executive director Terry Cannon getting things started.  Too bad I missed taking a picture with the annual cowbells ringing.  everyone is encouraged to bring a cowbell to join  the ringing.

Jerry Pritikin, also known as Bleacher preacher, the 2014 Recipient of the Hilda Award.

The Tony Salin award is giving to individuals for their commitment to the preservation of baseball history.  Jerry Cohen founded Ebbets Field Flannels received the award.

the keynote address was  delivered by Joseph L. Price, a professor of religious studies at Whittier College whom  has taught courses and published numerous essays on the subject of sports and  religion.

Writer and historian John Schulian did a wonderful presentation of Dizzy Dean. Nephew Sandy Dean could not attend due to a good baseball reason so Terry Cannon accepted the award.

Dodger Historian waiting his turn to talk about Don Zimmer and present the award to Jean “Zoot” Zimmer.

Mark Langill shared some stories about Don Zimmer from 1958 at the Coliseum.  He also found in Don Zimmer an invitation to Don and Zoot Simmer when they got married during a minor league game.  The “invitation” was provided you had a ticket to the game 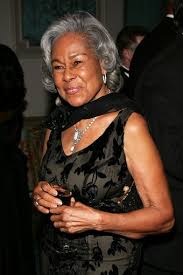 Peter Dreier, the Dr. E.P. Clapp Distinguished Professor of Politics at Occidental College, introduced the induction of Rachel Robinson, which was accepted by her sister-in-law, Delano Robinson.

From Dr. Peter Dreier “Rachel was a real pioneer. In 1940, only five percent of all women – and less than two percent of black women – earned a college degree. But Rachel wasn’t about to let those odds get in her way.”

After earning her master’s degree, Rachel worked as a nurse-therapist and researcher at the Albert Einstein College of Medicine in New York.

Rachel was hired as a riveter at the Lockheed Aircraft factory in LA, where they made airplanes for the war effort. She worked the night shift, drove to UCLA at dawn, changed clothes in the parking lot, and then went to class.

To encourage women to take factory jobs during the war, the federal government created an iconic figure – “Rosie the Riveter” – whose image adorned this famous poster.

But if America hadn’t been such a racist and segregated society back then, perhaps the government would have selected another woman to represent the nation’s female workers – “Rachel the Riveter”.”

Afterwards a large group of us went to dinner.

Like every year I had a wonderful time at the Baseball Reliquary Induction Day.  Looking forward to next year Induction Day but before that to receiving our ballot in the mail

Today is the day of the Baseball Reliquary Hope of the Eternals Induction Day!  I am heading that way soon!

The recipient of the 2014 Salin Award is Jerry Cohen, who founded Ebbets Field Flannels in 1988, a Seattle, Washingt…on-based company which manufactures historically-inspired athletic apparel, ranging from handmade reproductions of vintage flannel baseball jerseys to T-shirts, baseball caps, and even grounds crew jackets and sweatshirts, all made with a high level of craftsmanship and respect for authenticity.

Our talented  John Schulian will usher in Dizzy Dean into the Baseball Reliquary Shiren of the Eternals. 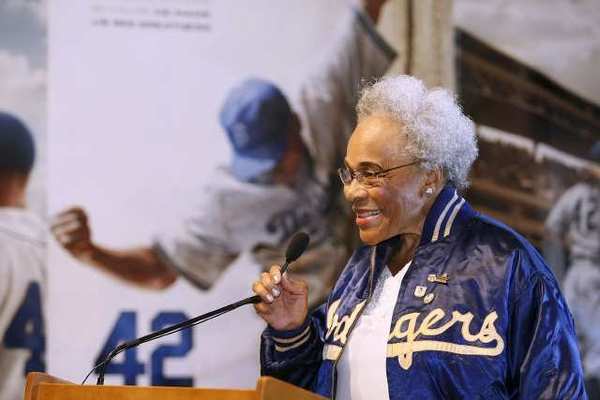 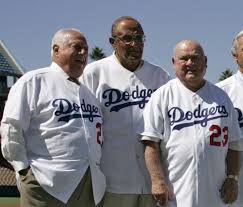 Here are two videos that I recorded in the Summer but barely uploaded.   They are from Manny Mota’s induction into the Baseball Reliquary.

Here is Jose Mota paying a great tribute to his dad:

Tomorrow is the Baseball Reliquary Induction Day so if you don’t have any plans, come to the Pasadena Library!

The festivities will start with an Induction Day tradition, the ceremonial bell ringing in honor of the late Brooklyn Dodgers fan Hilda Chester; everyone who attends is encouraged to bring a bell to ring for the occasion.

This will be followed by The National Anthem and “Take Me Out to the Ball Game”  performed by Joe Price, Professor of Religious Studies at Whittier College and a longtime Reliquarian.

The musical segment will be followed by the presentation of the 2013 Hilda Award to Emma Amaya .  The Hilda Award, established in memory of legendary Brooklyn Dodgers fan Hilda Chester, recognizes distinguished service to the game by a baseball fan.

Following the award presentations, the 2013 keynote address will be delivered by Dave Zirin, one of the most original voices to emerge from the field of sports writing in recent years.

The keynote address will be followed by the formal induction of the 2013 class of electees to the Baseball Reliquary.

For more information go to http://www.baseballreliquary.org/ or

Free parking is available in the University of Phoenix underground parking structure, which is located just north of the Pasadena Central Library on the corner of Garfield Avenue and Corson Street. The entrance to the parking structure is on Garfield.

Although the ceremony does not begin until 2:00 p.m., we encourage attendees to arrive by 1:30 p.m. (when the doors to the auditorium open) as seating is limited and available on a first-come, first-serve basis.

If you arrive when the library opens at 1:00 p.m., this will allow you ample time to view the Baseball Reliquary’s exhibition, Another Trip in Baseball’s Time Machine: Photography at the Field of Dreams (details below), which is being presented in the display cases in the Business and Humanities Wings, and the Centennial Room.

You can also take the Gold line.  The Pasadena Library is only a few short blocks from there.