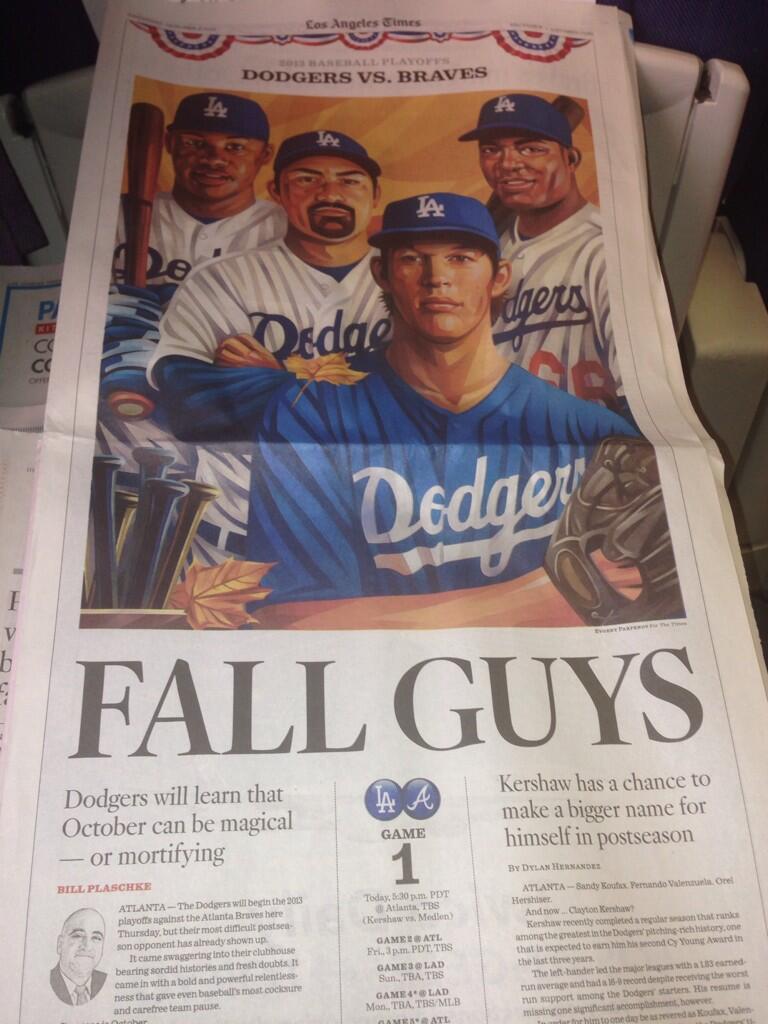 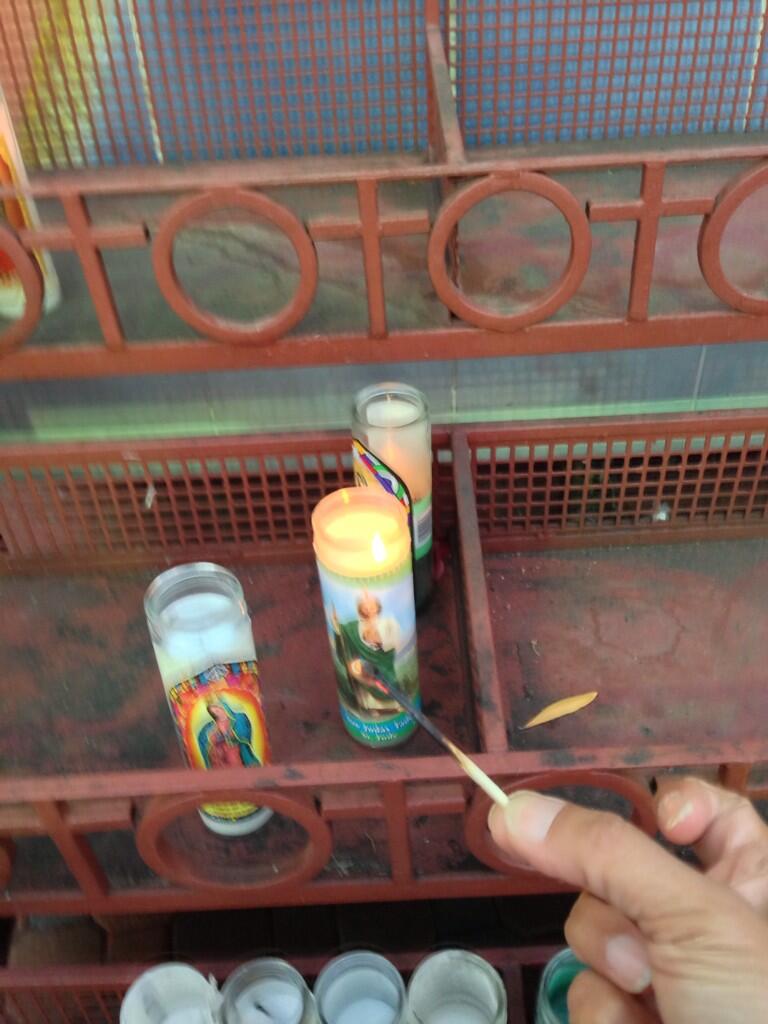 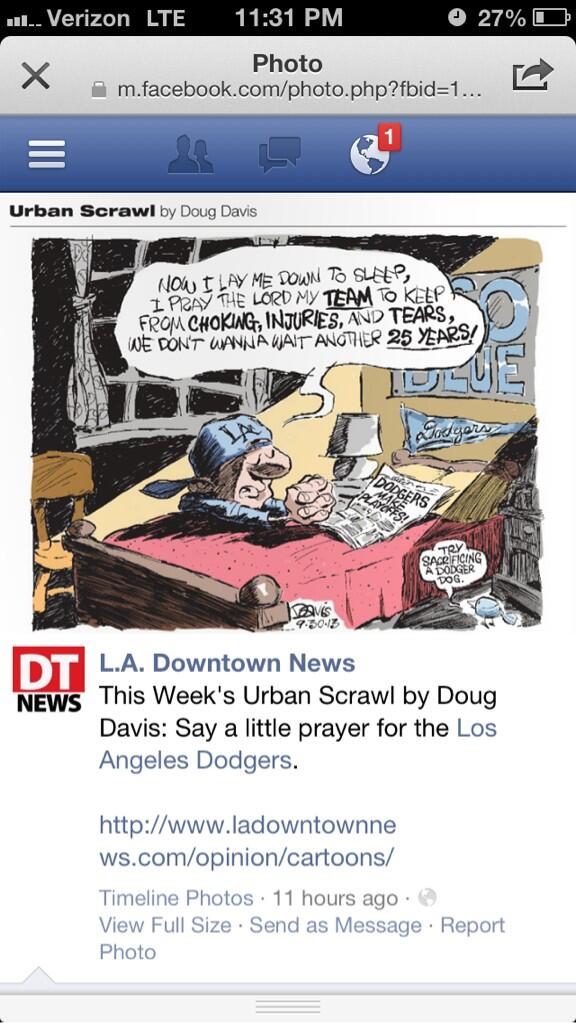 Dodgers lost today 12-0. It was one of those games, no hitting, no pitching, no fielding. There were three errors in the game including one given to Dee Gordon who was celebrating his 24th birthday. I don’t know what the official scorer was looking at because Dee Should not had gotten that error. It should have gone to Billingsley. I like Billz but how could Dee catch that throw? Anyway, let’s put that game behind us.

Dodgers are back in town! They play three with the Braves. The matchups are:
Monday: Jurrjens against Capuano
Tuesday: minors against Harang
Wednesday: Beachy against Lily.

I was showing my brother Vic that Lily is 2-0. He was saying “Lily is 2-0? He just came off the DL!” Then he said in Spanish “Que suerte tienen los que no se bañan” LOL. That means lierary “How lucky are those that don’t take a shower”, It applies to those that without having much “qualities”, Lucky Lady smiles at them and they do well. LOL. Vic said it laughing.

Thursday is an off day and I need one as I have a problem with my car driver’s side window. Friday’s matchup was supposed to be Kershaw against Strasburg but because of the Nationals rain delay, this is what MLB At Bat is showing for the matchups:

Friday: Detwiler against DBD (Why is it showing this?, I thought it was Kershaw)
Saturday: Strasburg against DBD (again, why? Maybe Kershaw has been moved here? )
Sunday: DBD, against TBD. Busy pitcher this TBD 😉

Rest in peace Joyce Terry.
I was very sad to find out during Opening Week that Joyce Terry, a member of the Top Deck family passed away. My deepest condolences to Carl. Carl and Terry celebrated their 62nd wedding anniversary at Dodger Stadium last year on June 20, 2011.

The picture is a picture I took of Carl’s pictures. The inscription says June 20, 2011. LA Dodgers 4, Tigers 0. Clayton Kershaw pitched a 2 hit shutout striking out 11.

I will miss seeing Joyce with her pink baseball hat. She was battling cancer but you could not tell seeing her walking down those stairs to her seat.

The first time I met Carl and Joyce was at Vero Beach in 2008. We were in the long line at the gift shop when Terry asked me if I had been to the Cardinals Dodger game the day before at Roger Dean Stadium. I said Yes! Then he said “Were you waiving a Dodger towel?’ Again I said Yes! We started talking about the Dodgers, where we sit at the Stadium. When I said “I have season tickets in the Top Deck. He said “So do we!” It is a small world.

Here is a picture of Carl and Joyce back in their younger days:

Here is a picture of their plane. They used to travel everywhere. Carl said they had another trip scheduled to Europe this year. It was such a joy watching them together. I can’t flip this picture so is going that way.

Rest in peace Joyce. Carl mentioned that Joyce name fitted her because she brought him and everyone else joy.

Dodgers came home to the Ravine for a six game home series against the Padres and Cubs after going .500 on the road. They came back with a record of 13 wins and 13 losses for the year and it would have been a loss had Tony Gwynn Jr not saved Broxton’s bacon with a fantastic catch in the outfield.

Where Broxton has been frustrating the fans, Andre has been a hitting machine with his 25 game hitting streak. Thought the hardest would have been last night’s Padre lefty pitcher Richards. Congratulations Andre! We’ll be at the Ravine cheering on your streak!

Hey I noticed the middle sign has changed from Trader Joes to Universal Studios. Here you can see it better with Pau Gasol giving us the Dodgers Code of Conduct.

From the last homestand of the throwback game with the Braves, the sign had Trader Joes in the middle.

Another throwback game coming up Wednesday with the Cubs. Curious to see the Cubs throwback uniform. In the meantime, is Kuroda on the mound tonight. Go Dodgers! Go Andre!

Dodgers Sweep:  A Balk-Off, A Walk-Off HR and a Walk-Off Single.

Even though the Dodgers swept Arizona, these wins could have gone either way.   The Dodger pitching was there and timely hitting along with some help from the D’Backs.

5/31/10: The Balk-Off.  Lopez piched well for the D’Backs but the defense let him down when  Kelly Johnson committed two errors in one play that scored two runs.  Then came the Balk from Vasquez causing the balk-off for the bearded one Casey Blake.  Billingsley was lights out after the four homeruns he gave up in the first two innings.    Final score:  Dodgers 5, D’backs 4.

The guys in the dugout pointing out to the balk.

6/3/10.  A business special that started at noon.    This one had ex-Dodger Edwin Jackson going against rule-5 Carlos Monasterios.     It went 14 innings with rookie Travis Schlichting (I love the name!)  pitching 4 scoreless innings and picking up the win!  The kid also had his first MLB at bat.   Valdez took the loss on a walk-off single by Garret Anderson.  Final score:  Dodgers 1, D’backs 0.

So the D’Backs have gone 31 innings without scoring a run.   They lost all nine games on the road and lost 10 straight now.  Ouch!   The D’Backs starters pitched well, the bullpen is another story.

The red-hot Braves are in town for a four game series.    Braves have won eight in a row, the Dodgers four in row.    Remember April?  These two teams were in last place with an identical record of 9-14.

I feel so bad for Armando Galarraga but the guy was classy, he kept his cool.   In our hearts you pitched a perfect game Armando!   I don’t know what did Jim Joyce see in that play but he apologized to Armando.