I know I’ve been a little down with the Dodgers getting swept at Boston and that running blunders of game two against the Angels but we won last night in big fashion 10 -6!!   woohoo!

And tonight my boys in blue are back at OLOCR _Our Lady of Chavez Ravine that is Dodger Stadium, our Blue Heaven on Earth!

The LA Times has two wonderful pictures in the sport section:  One of  Joe DiMaggio with  Mickey Mantle and the other of our pair of aces, Sandy Koufax and Don Drysdale.  the title?  World Class.  check out the article hereWorld Class  Love this pic: 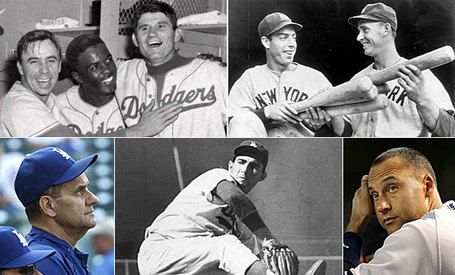 The matchup for tonight’s game is:

Remember that homerun CC Sabathia hit at Dodger Stadium during that interleague game in  when  he was with Cleveland?     We were both at the game in 2008 but could not remember who he hit the HR off of?   Guess who?

Chan Ho Park!  I am sure CC is looking forward to swinging the bat again.

Padilla:   Make sure we don’t see this:

I want to see this:

I am thinking “Maybe Sandy Koufax would be in attendance!

It got to be a little weird for Joe Torre seeing the Yankees in town.   BTW, Torre and Jeff:  When am I getting my baseball?    Last time I received a text from Jeff from the Safe at Home Foundation, he said he had my baseball signed by Joe and Koufax in a safe place.