Here is the Bobblehead.  To me the actual Bobblehead looks like Chan Ho Park.  Here is also a picture of Chsm Ho Psrk & Ryu.

This picture fron Billingsley is from yesterday. He was in the bullpen when I got to the stadium as soon as the gates were open.

Here is the video from that day;

One early morning on my way to the Glendale train station to catch up with my train, I noticed this mural that included Dodger Stadium.  I did not have a chance to stop but the next time that I took the train there, I made sure to stop and take pictures.

It is located at the LAPD Northeast division on San Fernando Boulevard.    It shows Dodger Stadium, the Police Academy that is next door to Dodger Stadium.  In this picture too is the Los Angeles Zoo.

Here is another part of the mural

And here is another part of this long beautiful mural that measures 21’X16′.  The mural was designed and painted by more than a dozen young artists.

I just read this week’s Workpress Photo Challenge https://dailypost.wordpress.com/2014/01/24/photo-challenge-juxtaposition/comment-page-4/#comment-300964 and right away I thought of the pictures I took today at Dodger Stadium. The juxtaposition of the elements at Dodger Stadium with tonight’s hockey game.

Hockey game at a Baseball Stadium?   Yes!  LA The Kings will meet the Anaheim Ducks.  The San Gabriel mountains in the background.

pictures taken by me in the Top Deck of Dodger Stadium.  My Dodger purse showing

Hockey sticks and other merchandise are being sold at Dodger Stadium to commemorate this historical hockey game. 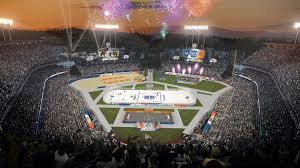 I saw this on the Metrolink website at http://www.metrolinktrains.com/news/promotions_detail/title/stadium_series_2014

The National Hockey League is hosting a special Stadium Series hockey game between the LA Kings and Anaheim Ducks at Dodger Stadium.  Metrolink is promoting the use of either Amtrak or Metrolink from Orange County to LA Union Station to attend the game.  For Metrolink schedules, click here.

Metro will operate the Stadium Express shuttle with pick up on the Patsaouras Bus Plaza adjacent  to the east portal of Union Station.  The bus will continue to Dodger Stadium via Sunset Blvd. and Cesar Chavez Avenue.  Service will be provided starting 90 minutes before the beginning of the game and will end 45 minutes after the end of the game.

The return trip back to Orange County is only available on Amtrak 796  departing from L.A. Union Station at 10:10 p.m..  For this game only, Amtrak will hold the train up to 45 minutes in the event the game goes into overtime.   If you ride Metrolink to L.A. Union Station, you must purchase a separate Amtrak ticket one-way for the return trip from the ticket vending machine.  One-way Amtrak tickets start from $12.  Visit amtrak.com for more information.

Metrolink riders can board the Dodger Stadium Express at Bay 3 of the Patsaouras Transit Plaza at Union Station.

For those fans who want to experience a pre-game dinner near Union Station, here is a list of restaurants within a 10-minute walking distance of the station.

Here are more pictures from my visit to the Los Angeles Sport museum where the SABR local chapter had a meeting:

Fernando Valenzuela with a mustache.  Jijiji.

Who remembers when we used to get a TV guide in the newspaper?  This from the Los Angeles Daily News in 1981.

I never knew these records existed from Union 76.

Union 76 pins.  I used to collect these.  Other Dodger memorabilia.

I love this scorecard.  The Dodgers used to sell individual scorecards.  Now they don’t but see them at other stadiums.  I wish they would bring this back.

Dodger Stadium and the retired Dodger numbers.  Oops! sorry Drysdale, I cut out part of your 53 number.

Isn;t this Dodger apron great?  It says “The Heck with Housework.  Let’s see the Dodgers Play!”  Yep, that is what I say…;-)

Dodger Stadium replica.  A Red Sox jacket to the right.

I love this picture.  On top it says “The proverbial Brideman”

Dodgers Take me Out to the Ballgame.

The Dodger collection wall going up the stairs.

The other side of the above Dodger collection wall.

Jay Johnston speaking with a Yankees memorabilia in the background.

It was a great event.  Jay Johnstone made us laugh.  He had his book signed available for $20 including a picture of him signed and authenticated.  Funds went to a charity .  I already had his book but I bought another copy.

Andy McCue had a great presentation that day on the history of the Angels and Dodgers when the Angels were the Dodgers tenants at Dodger Stadium.

Rick followed with a presentation of his top baseball movies and also Barry’s top 10.  Also a comparison of actors and the baseball players they were portraying on how close they resembled the players.  After both presentation we only had an additional 30 minutes to view the museum.   I had a great time that day.  I only wished I had more time to spend at the museum.   If you have chance, check it out but it is a private museum.  For more info go to http://www.sportsmuseumla.com/  For more information on SABR go to http://sabr.org/

What a great game by the Dodgers at the Ravine! What a brilliant performance by rookie Hyun-Jin Ryu! Ryu shutout the Cardinals 3-0. He scattered three hits in the seven innings he pitched.

Super fan Rachel and my brother Victor after the victory

Don Mattingly was all smiles

Hanley was all smiles too!  I love Hanley Ramirez!   I love the Dodgers and I love LA!