It is going to be a busy year of traveling  for the Dodgers.   The team will open the season in Sydney, Australia, against the Arizona Diamondbacks for a historic series on Saturday, March 22 and Sunday, March 23.  Will I go to Australia?   I am not sure yet… 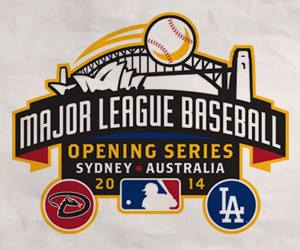 The Dodgers return to the U.S. and play at San Diego Monday, March 31 through Wednesday, April 2.  Yes! I will be in San Diego for the Dodgers second Opening Day on the road.

From the Dodgers Press release:

The Dodgers’ home opener is Friday, April 4 against the San Francisco Giants and the club concludes the regular season at home against the Colorado Rockies on Sunday, Sept. 28. American League teams that will visit Los Angeles throughout the 81-game schedule are the Detroit Tigers from April 8-9, the Chicago White Sox from June 2-4, the Cleveland Indians from June 30-July 2 and the rival Los Angeles Angels of Anaheim from Aug. 4-5.

I have never been to Kansas City and Detroit. Both of those road trips are mid-week.   Then there is the SABR convention that will be held in Houston next year.

Dodgers will play the Cubs in September?  Ok..  It is a four game series starting Thursday 7/18 to Sunday 7/21.   Maybe it is time to go back to Chicago.

Ok, so here is the scratch that.  the last of the regular season schedule:

Thank you Mike from www.theLFP.com for the calendar!

I learned something new to me.  If I create a category you can have all the related posts together so if you go to the right to category “Dodgers Schedule” I can scroll down to all the the Dodgers Schedules here.  Haha  Silly me,  should have realized that sooner.

They are giving me a hard time at work because I have my Jackie Robinson jersey on (only day I can wear casual clothes)   This guy tells me “Is Super Bowl weekend and lots of people at work are wearing Football gear but not Emma”  “She could wear football or hockey but noooo….”    I do have my purple and gold Dodger hat 🙂

The All-Star game is in New York on 7/16. Yankees come to Dodger Stadium 7/30 & 7/31 and Dodgers travel to Toronto 7/22 to 7/24. I’ve been to Rogers Centre when in 2007 I was sent to Toronto for a few days. The Blue Jays were in town playing against the Red Sox so I went to a game and saw Daisuke Matsuzaka pitch.

June is my birthday (6/28) and my boys in Blue will be playing against the Phillies.

Below is the June calendar schedule courtesy of Left Field Pavilion

I am looking forward to the return of The Oldtimers game on 6/8! The Braves will be in town then. Also Sandy Koufax bobblehead is 6/27 🙂 And let’s not forget a trip to Yankee Stadium, God willing.

Here is the Dodgers April 2013 schedule courtesy of http://www.thelfp.com/blog/

Thanks to Rene for reminding me that the Dodger games at Baltimore are in April.  I had forgotten!

Ahhhh this is so cool!  Thanks Mike!

For Opening Day, well is a Holiday for me but I have already asked my boss for a vacation day!   He did give a hard time as is Fiscal Year-End closing at work but I reminded him I worked two days during the Holiday shutdown.   He says that is the reason why he approved it but like I said, he knows Opening Day is MY religious Holiday.

So anyone have any tips for Baltimore?