My season tickets went up 50%.  I got my invoice some time ago but I have not responded.    I have also gotten a couple of calls from Dodger reps that have gone to voice mail.  I can’t deal with the calls right now.   I am not a happy camper with how the Dodger season went and what a bleak future we Dodger fans are facing with the pending divorce.

It would be a different story had the Dodgers done better.  The Giants winning the World Series did not help.   Right now, well, I rather not talk to anyone from the Dodgers about renewing my season tickets.

I should change my voice mail to something like “Sorry I am not available right now, I have

crawled under a rock.  I will be hibernating until I forget the Giants won the World Series or until the Dodgers get a new owner that will sign a legitimate number one pitcher and a left fielder and a third baseman.”   What do you think?

I have gotten calls, emails from fellow season ticket holders asking me what I plan on doing.   I know they are not happy.   Some of the tickets are going up more than that now that the Dodgers will charge more for the first rows in a level so for some the increase will be more than 50%.

I know my mood will pass and in the end I’ll give them my money.   I mentioned in my prior post that I am reading  “Eat Pray Love”.  I am at the eating part of the book where Elizabeth is in Italy.   Hanging out at a soccer game with friends, Elizabeth’s friend Lucas Spaghetti (She says that is his real name)  says to her

Elizabeth also mentions that the word for “fan” in Italian is tifoso.  Derived from the word Typhus.  In other words_one who is mightly fevered.”

Thanks to everyone that voted for me in Jane Heller 2010 She-Fan Video Award MLB Bloggie Award!   You are so sweeeet!   love you all!   I won!  thanks to you all!

When we were down 3-0 in the first inning, I was saying”Oh boy here we go again, having a bad first inning.”   but the boys came back and Kuroda-san settle down.   Kuo was NASTY!  Was that really a 98 MPH fastball he threw?!?!

The game ended with a great play by Furcal.  It was the #1 Webgem for Saturday:

Let me say this again,  “(insert team) suck” has to be the most immature, stupid chant I’ve ever heard.   You don’t hear it with the regular season ticket holders around me and I imagine with true Dodger fans and Baseball fans.    I also don’t boo great players.

On his birthday, Derek Jeter struckout three times.  Kuroda, Kuo and Broxton struck him out.  Joe Torre was quoted as saying “Well, it was my present to him”

Earlier in the day, Joe Torre and Derek Jeter had gone to the John Wooden public memorial at the the UCLA Pauley Pavilion.

Did  I say that Kuo has been NASTY lately.  This guy has gone thru so many T.J. operations and is basically an out away from ending his career but he keeps on pitching!   My Dodger hat off to you Kuo!

And my boy James Loney drove in four runs!  Here is Loney with my friend Erik who is celebrating his birthday today.  Happy birthday Erik!  May the Dodgers bring us a win! 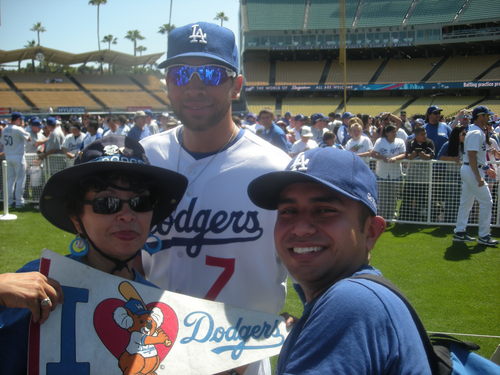 I finally got to meet the famous Jane Heller!     Too bad I just spent a little time with her.   I also got to meet her husband and LadyJane who posts in  Jane Heller’s blog.   Wish I would have gotten a second chance to take the pic as this came out a little blurry and to spend more time with you and your husband Jane. 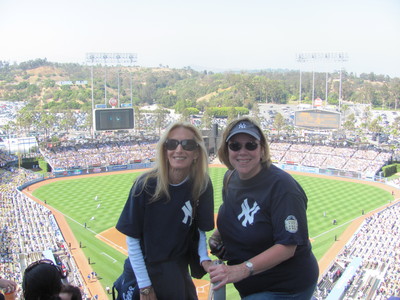 A battle of lefties for the rubber matchup today:  The tough Veteran Andy Pettitte against 22 year old Kershaw.   Kershaw needs to control those walks.  He has given up 48 walks, the most in the NL and the Yankees lead the Majors in OBP.

With Fox doing the game yesterday and today ESPN,  I MISS VIN SCULLY!

Oh I forgot to mention that after his running, Padilla came over to the rail in the left field side and signed alot for fans in that side then the center field side.   Quite a few Yankee fans were there too getting his autograph.  I and many congratulated him on his outing the day before.  He signed my scorebook.    I asked him in Spanish who he was rooting for in the World Cup after USA was already out.  He looked at me, smiled and said “Is going to be tough but I am rooting for Mexico.

What does Brooklyn Dodger Jim Hughes and L.A. Dodger Bill Russell have in common?

Jim Hughes, a hard-throwing relief pitcher for the Brooklyn Dodgers of the 1950’s, set a franchise record for saves that endured for 35 years. 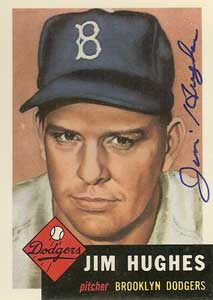 ”He was a big, tough guy,” recalled Tommy Lasorda, Hughes’s onetime roommate when Lasorda pitched briefly for Brooklyn. ”It would take him three, four pitches to get warm. After a few pitches, he was fogging it. Nothing but hard stuff. Didn’t have a breaking ball.”

Hughes had two careers as a fireman — one, informally, in baseball, and another in carrying on  a family tradition in Chicago.

When he began to quell nonbaseball fires, Hughes could not resist playing on the obvious when he visited one day with his former Brooklyn Dodgers manager, Walter Alston, who was sometimes known as Smokey. Hughes donned a Dodgers jersey for a photo with Alston, but that was not all. As his son Michael recalled: ”He had a fire helmet on his head, he carried an ax and he had a hose over his shoulder.” 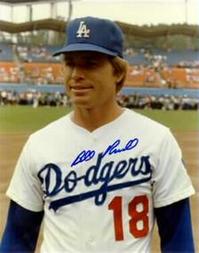 Bill Russell played 18 years in the majors, all with the Los Angeles Dodgers. With Steve Garvey, Davey Lopes and Ron Cey he formed the longest running (and perhaps the greatest) infield in baseball history.
He appeared in 10 post-season series for the Dodgers.  He made 4 trips to the World Series with them, in 1974, 1977, 1978, and then finally winning a title in 1981,  but was unable to duplicate that success later as their manager.

One time I ran into him when the Dodgers had the Triple-A 51’s team in Las Vegas.  He was there checking the umpiring.   I’ve ran into him at Dodger Stadium several times.

Thank you everyone that visit my blog.  Of the top 20 fan blogs, 9 are she-fans, lead by the number ONE she-fan  Jane .  Congratulations to everyone!

Congratulations to the blogsphere 5th year anniversary!    I’ve been here a year and months but I have been posting longer than that!  I love that we share our love for this grand great game!

They may be Bums, but they are MY BUMS!  Go Dodgers!!