While watching the game Friday night at Dodger Stadium, I noticed an announcement on Diamondvision.   I did not get a chance to take a picture or write down everything it said but “we got the picture.”   It said along the lines “the fans on the field level are invited to attend DodgerTalk on the baseline field level restaurant.”   The restaurant is closed by then so only Dodgertalk is going on there on Fridays and Saturdays.

In the past, my friends and I have been able to go downstairs to Dodgertalk but once we saw that sign on the Diamondvision, we decided to skip it Friday night.   Is ashamed that they no longer permitted us to go there.  My friend Linda and I enjoy stepping up to the mike.

Here is a picture of one of the times we attended Dodgertalk last year.   The hosts on KABC are Josh Suchan and Ken Levine.   A fan had brought their Brad Penny bbh and smashed it there.

OK, enough with the rants.

Congratulations to Jeff Weaver on his 100 career win last night.   Is too bad that Ely had to be sent down to make room for Weaver but I am sure the kid will be back. 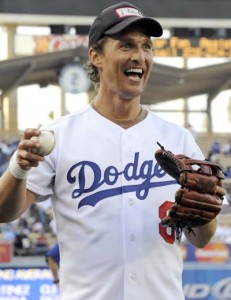 My first road trip of 2010 will be this Friday when my friends and I leave early Friday morning!   We will be back on Monday.

The Dodgers will open Friday against the White Sox.  Padilla will start followed by Ortiz and Haeger plus relief candidates Luis Ayala, Scott Dohmann and former White Sox Jon Link.

Former Dodger Juan Pierre is among the new White Sox.  A name that I had forgotten that is now a White Sox is Andruw Jones.

I can’t wait!!!!!!   I was checking the weather report in Glendale and they are predicting rain for Sunday but who cares!  We get to see our boys in Blue! and guess what?  Sandy Koufax is there!!  Whoohoo!

This time we know where they have those cameras on the freeway so we are prepared!

Congratulations to Jeff Weaver  who became a dad last Wednesday.  Son Drake weight in 8 pounds.  Congrats to the Weaver family including uncle Jered.

Luvthedodgers23:  Shall we look for Adrian Gonzales restaurant this time?

We lost another Brooklyn Dodger player.

Some of you might remember my post about Brooklyn Dodger Players Alive, well, I am sorry to report that we lost another one.

Hearing that Carl Erskine nicknamed “Oisk” is at Great American Ballpark brought a smile to my face.

Oisk is a former right hander starting pitcher that played his entire career for the Brooklyn and Los Angeles Dodgers from 1948 to 1959.   He lives in Indiana.  Rick Monday said he is at the ballgame wearing his Dodger hat.   I actually bought a baseball with his signature some time ago.

Known as “Ersk”, or more accurately “Oisk”, owing to the Brooklynese diction of the borough,  Along with Snider and Reese, he lived in the Brooklyn neighborhood of Bay Ridge, and was frequently to be found around the baseball diamonds on Shore Road, offering encouragement to youngsters.

Manny with a homerun since forever!  Juan Pierre was on base in the first inning.  In the second inning the Dodgers score two more runs but in the 3rd inning with two homeruns by the Reds by Craig Tatum (1) and Paul Janis(1) Haeger could not get out of the third so Jeff Weaver on the mound.  Score tied 4-4.

I am back after taking a shower and getting ready to go to a party.

OMG!  Rafael Furcal with a homerun!   There is this contest where you fill out a paper saying who of the Dodgers will hit a homerun in the fourth.  If they pick your entry and announce it on the radio you are a winner if the guy you pick hits it out.  Well, I heard the guy’s entry and he said “Furcal”  I was like “yeah right”  Well, he did not hit in the fourth but he hit out in the fifth.

On this day in baseball history in 1948, Jackie Robinson hit for the cycle,

Blue Star for past and present Dodgers!

Randy Wolf knocks in the only two runs and throws seven brilliant innings on Friday!   What a great early birthday present he gave himself!  Randy Wolf’s birthday was Saturday 8/22.   He along with Jeff Weaver share a birthday.  they both turn 33.

Saturday was a Fox sport game and what a performance by the knucleballer Charlie Haeger!  He baffled the Cubs.   Charlie went seven innings.  Closer Jonathan Broxton came in in the eight but Joe Torre explained that it was only so Broxton could face the same guys he faced the prior night.  George Sherrill closed the game in the nine.  Final score: Dodgers 2, Cubs 0.   The two runs came as a result of two homeruns, one by Casey Blake and Matt Kemp. . Speaking of Kemp…

MATT KEMP.   Wow Matt!  Matt Kemp hit one out of the ballpark!  It went out of the Dodger bullpen.  I could see fan running in front of the gift shop in that area after the ball.   The ball travelled 449 feet.

Prior to that there have been only three players that have hit homeruns out of Dodger Stadium.  They are:

Willie Stargell is the only person to ever hit two home runs out of Dodger Stadium. His first was a 506 foot bomb off of pitcher Alan Foster on August 5th 1969, and the other was a 470 foot shot off of Andy Messersmith on May 8th 1973.

It wasn’t for over 30 years before Mike Piazza became the second player and only Dodger (until yesterday) to ever hit a home run out of the park. On September 21st 1997, Mike Piazza hit a 478 foot home run off of San Francisco Giant pitcher Mike Lansing.

Meet one of our ushers in the Top Deck:  Leonard is a true Dodger fan!  Check out his tatoo! 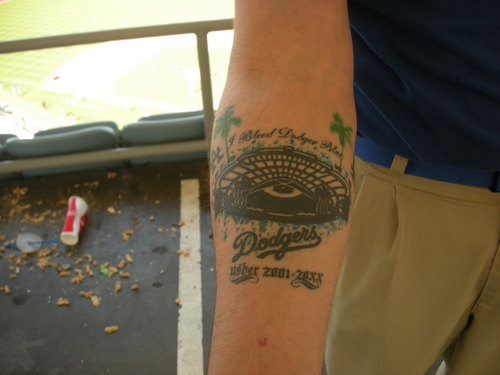 First of all, great win last night against the Cubs!   Weaver who started for the injured Hiroki Kuroda, kept us in the game going 51/3 innings.  His ERA as a starter is now 3.13.  Good job Weaver!!   Russell who has been struggling, hit a grand slam in the 6th!    We asked for a curtain call.   Keep it going Russ!

At 8:09 PM,  I get a message  that there is a new comment in my blog.  The message was from ADucker at http://dodgerstrends.mlblogs.com/  If you have not checked his blog, check it out!  He gives some great analysis with supporting statistics!.    I have never met ADucker who lives in Delaware, but I guess he has seen a few of my pictures.   anyway he posted the following comment:

I think I just saw you at the game on TV, Emma.  In the 2nd inning with Furcal at the plate on ball 3 to make it a 3-2 count the camera shows either you or your twin sitting next to a young kid with a white shirt. I took a screen capture of it just for fun.

I was like Wow!   that is funny!  Here is the screen picture: 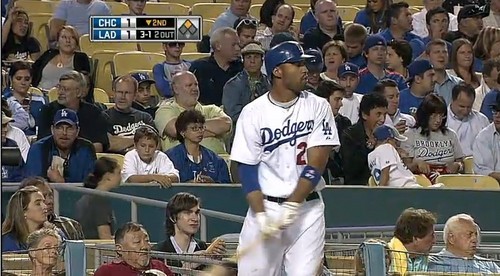 Yep!  that is me to the left of Kemp.  Notice Tommy in the bottom right corner.  Thanks ADucker!

Oh I did got to take pictures of John Cena and I got his autograph for my cousin’s little niece.     .

THINK CURE:  Like last year, the THINK BLUE sign has been changed to THINK CURE for the Second Annual Think Cure! Annual ThinkCure! Radio Telewebathon.  Check it out at   http://mlb.mlb.com/la/community/thinkcure_auction.jsp    Hiroki Kuroda is matching the first 25K donated during the telewebathon.   You can bid on an assortment of things like these Dodger Experiences:

Dodger Experience: Visit Vin in His Booth: Package for 2 includes a visit to meet Vin Scully in his booth at Dodger Stadium which is currently at $3100.

Dodger Experience: Take an Insider Clubhouse Tour: This package for 2 includes an insider tour of the Dodgers Clubhouse with Josh Rawitch

Here are other  items you could win:

Script Review: Script writer Ken Levine – from MASH and Cheers TV Shows – will read and critique your own original script

join the dodgers at 2010 Spring Training in Glendale, Az.

and many many more!

UPDATE***  Please check Julia’s blog.  A fellow poster’s dauther has been missing.   Maybe someone in the West Coast have seen here.  Keep her in your prayers that she is found safe..

The Magic Castle!  That is what Vin Scully called Dodger Stadium last night!  There is a lot of magic going on at OLOCR (Our Lady of Chavez Ravine)!   Magic Castle!  I like it!!

The original Magic Castle is in Hollywood.  Is an exclusive place so you need a special iinvitation.  I was lucky to be there once.

But I prefer this Magic Castle that Vin Scully was talking about.  Dodger Stadium is a magical place to watch a game.

There was a triple play yesterday by the D’Backs but the Dodgers won their consecutive #11 win at the Magic Castle.

First of all, welcome back home Jeff Weaver! I know you’ve had some good games but also some rough times since you left the Dodgers, but I will always remember the game you pitched at Dodger Stadium when the Dodgers were honoring the Boys of Summer. It was….August 28, 2005 and the Dodgers were celebrating the 50 year anniversary of the Brooklyn Dodgers winning the World Series. I had a friend from Delaware who was in L.A. just for this event and 3 other friends from San Diego that had been looking forward to that day. . Needless to say I could hardly wait to get to the stadium that day.
.
From the time that I walked into Dodger Stadium, I could hear Vin Scully practicing over the mike for all the introductions he was going to be making. Afterwards the surviving members from the 1955 team were seated around the infield while in the background “The Boys of Summer” was playing. Vin Scully took his place introducing the players giving brief descriptions of career highlights. When he got to Sandy Koufax, well, Vin knew he would not be able to say much without having people applauding thru it so he said ” “Do I really have to go through this list of extraordinary achievements, or should I just let you show your appreciation?” Koufax, of course, got a standing ovation. Sandy, the humble man that he is, was gesturing “please, stop it”
.
Carl Erskine, one of the 1955 Dodgers pitchers, played “God Bless America” and the National Anthem on his harmonica just prior to the start of the game.  Johnny Podres, hero of the 1955 World Series who shut out the Yankees in Game 7, threw out the first pitch to Roy Campanella II, son of the late, great Dodgers catcher.
.
What followed was a classic pitching duel, scoreless baseball for 7 1/2 innings of play as Roger Clemens then with the Astros battled L.A.’s Jeff Weaver. Finally, the Dodgers were able to push a run across the plate in the bottom of the 8th inning.
.
Jeff: You rose to the occasion that day!! I hope you rise again to the occasion and have a great 2009!