I really thought the Dodgers had this Saturday game wrapped when the score was Dodgers 8, Cubs 5 but the bullpen let it get away when the Cubs scored five runs in the 8th. Final score: Cubs 10, Dodgers 8. LP: Guerier. WP: Jeff Samardzija (had to look how to spell that!)

I was one of the many Dodger fans that got interviewed at Dodger Stadium to give our opinion about Bug Selig taking over over seeing the Dodgers: Here is a link to the interview from KCAL channel 9 which is owned by CBS. You have to click on one of videos about fans being interviewed at the stadium

Friends on Facebook told me they saw this picture in the LA Times sport section online. I am taking a picture of Deuce with Jerry Sands.

Here is the picture I took: 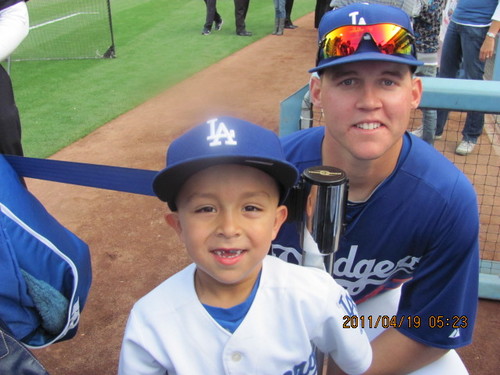 Rubber game on this Easter Sunday is so far Dodgers 6, Cubs 2. No lead is enough with our bullpen so Go Kuroda-san! Go Dodgers! 21 game hitting streak for Andre Either!

After a delay of 25 minutes, the second game started. Kuroda san was magnificient shutting down the Padres for 8 and 2/3 innings. Tony Wynn had a big night too.

Spotted this Dodger fan with this sign that says: We come in Peace. Go LA Dodgers. 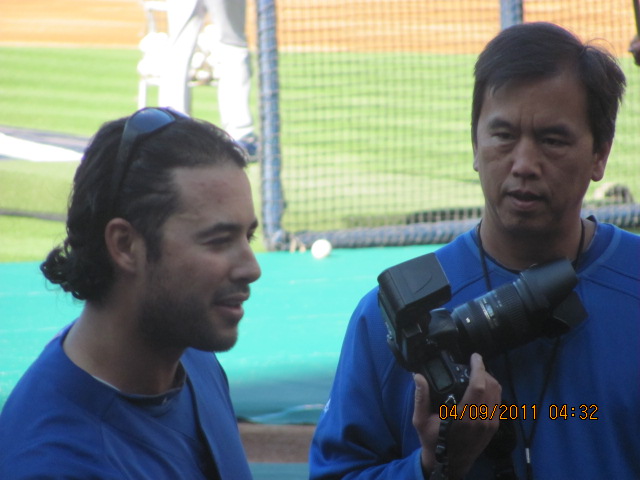 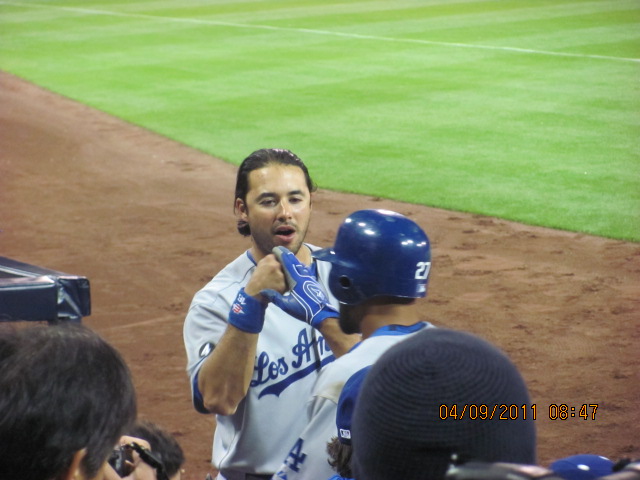 There is more, but got to check out of the hotel, move the car and head to the game! Go Dodgers! Go Ely! going for the sweep!

From Last to First.    The Dodgers’ win coupled with the San Diego loss took over first place in the National League West for the first time in 2010!   . After losing to Colorado on May 8, the Dodgers were in last place, 6.0 games behind the Padres, and have gone 22-7 since!

Kuroda-san pitched his best game against Carpenter but Kuo got the win and Jonathan Broxton the save.     Final score: Dodgers 1, Cardinals 0.

Last Saturday my friends and I went to see Ely at an assigned signing at the At&T store in Culver City.    We found Ely to be personable and adorable.   Here are some pictures: 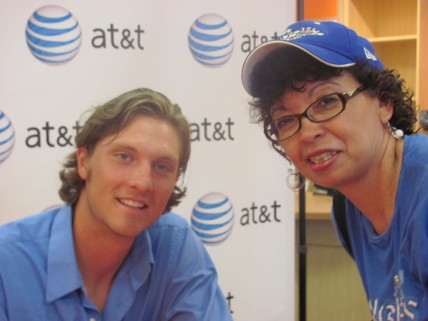 Ely Signed my scorebook on a scoresheet where he pitched!  He looked at it and said “This is Cool!”   He was impressed with Lorena who asked him who his favorite pitchers were growing up.   I took a picture of Lore and Ely with her camera.   Then after my pic with Ely, we were asked if we wanted one with both of us in the picture.

Thank you Ely!  Thank you At&T and thank you KABC for the tickets!   We sat in the Reserved aisle 7 on Sunday, courtesy of KABC.

Tonight’s game:  Clayton Kershaw against Wainwright.  This time I will be able to watch the whole game.  Yesterday I was working with the Red Cross collecting pledges for the upcoming Annual Blood Drive for Saturday June 19.

This is an annual competition between the Angels and the Dodgers Booster Club.   If you donate at this annual Blood drive, you get a voucher for your choice of team tickets,  a commemorative t-shirt,  a voucher for fish tacos from Wahoo, and a voucher for the Laugh Factory in Pasadena!

I am glad I went to the game last night!  After seeing the Dodgers give up 22 runs in two innings, but like my friend Bluetide said “who am I kidding?, I am a junkie!”

Congratulations to Ely for a great performance.  You deserved the win kid but you know it became a team win.

Congratulations to Andre for his second grand-slam of the year!   And his second walk-off this year!

Off to the stadium soon.  Wish my alergies were better.

Woohoo!   the pride of Defiance, Ohio, Chad Billingsley came thru with the first win of the season.

But guys (Padillia, Kershaw, Billingsley) , we do need someone to go beyond 5 1/3 innings!   Let’s hope Kuroda can give us at least 7 innings to give the pen some rest.

Belly (Belliard) went 3-5 with four RBIs’ and a Homerun.

Reed Johnson who has an MLB Blog here Reed Between the Lines went 3-4 with two RBIs!

I joined the MLB Baseball fantasy team this year.  Thanks Julia!  Thanks Chris!

Among the players I have in my team Los Locos Azules are:

Clayton Kershaw!   My baby will come back strong!

Vicente Padilla.   Tengo fe Nica! (I have faith in you Nica!)

Jonathan Broxton!   Another one of my favorite Dodgers!

Because Kuo is on the DL, I got Monasterios!   I am excited about this Dodger rookie!

Four days till Opening Day at Dodger Stadium!  In the meantime the Boys in Blue will play the Marlins starting tonight for a three game series!

Please join Major League Baseball and its 30 Clubs in providing emergency support for children and families affected by the earthquake in Haiti.

Two Ways You Can Help Now:

Messaging rates may apply. Check with your carrier for information.

Everyone of our arbitration cases have been settled!

Here are the deals:

Ok, next a pitcher!

Yeah, the Dodgers lost this game 11-0. Cliff Lee was unhittable.  Kuroda did not have it and our bullpen got hit.  Ouch!  BUT there got to be some positives in that game right?

OK, if I think of any more postivies, I’ll post them later.

Thank God we could listen to Vin Scully during this game.  Here are some comments by Vin:

Vin  talking about the zig zag pattern of the outfield dimensions at the phillies ballpark: “It is as if the architect had a case of the hiccups”.

Afer a line drive that scored Carlos Ruiz to make the score 5 -0 Phillies, Vin said “I’ll be honest, the bell is not the only one with a crack on it.”

After Vinny reads a promo about a DODGERLIFE event that allows you to hit, throw, run, eat….swing for the fences…,he said

“I’ll tell you right now, is a heck of a time to read that promo.  None of the things the Dodgers are doing right now.”   LOL.

After the game was finally over:

We love you vin!!

And we love our Dodgers because they may be bums, but they are our bums

Today is the anniversary of that famous home-run by Rick Monday in the NLCS series against Montreal!

I am starting to get nervous.  I get like that before big games and the closer it gets to Thursday, the more nervous I will be.  I need to relax.  Looking at our beautiful Dodger Stadium always relaxes me…(pic taken from my seat). 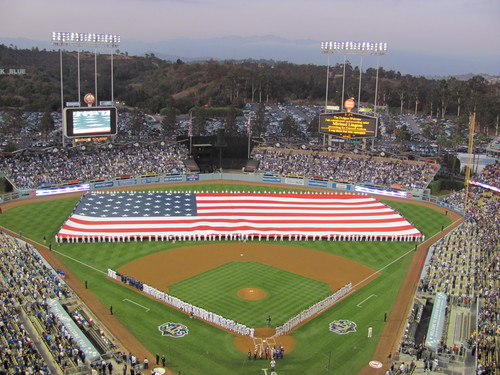 And also looking at the sunset from there (pic taken from Top Deck by me).

Ok, I am ready for the Dodgers facing the Phillies.

Who will start the first game?

will it be Chad Billinsley

Or will it be lefty  Randy Wolf

Or will it be lefty Clayton Kershaw

Will Kuroda be activated

Or will it be Vicente Padilla

I laughed when I saw this pic that I found from MSTI’s blog.

Bring it on Phillies!!

Dodger Stadium will be rocking!

I need this today

But no worries, sunny skies are predicted by Thursday and Friday.

All this TBA is driving me crazy!

The Dodgers took 2 out of 3 from the Giants! Casey (at the bat) Blake returned from five games off with a three RBI homerun!

Dodgers own Matt Cain.  He is 0-7 lifetime against the Dodgers while Hiroki Kuroda is 5-1 against the Giants.

Russell Martin & James Loney homered on Saturday.  These two are heating up!  Torre needs to keep James (ballgame) Loney in a grey uni.  All his homeruns (12) have been on the road.

You see Penny left the Dodgers on not so nice terms. For one, the Dodgers didn’t believe Penny last season when he said his shoulder was hurt, and he didn’t take that very well. After Penny signed with the Sox he let the Dodgers know how he felt.

Upon his arrival to the Giants Penny met with the media, and one reporter asked him about pitching in front of 42,000 Dodger hating fans. Penny interrupted the reporter, then corrected him; “You mean 42,000 and one.”

I am really, really worry about Chad Billingsley.  Like Vin Scully said “the mistery of Chad continues.”    Chad has struggled big time in the second half.

The Pirates are in town starting tonight!.

The matchup is McCutcheon against Jon Garland.

Free Dodger Dogs for everyone!  We never had this promotion before, so let’s see how this goes.  I understand that they will hand out coupons to everyone.

On this day 9/11, I want to give a big thanks to all firemen in this great country! to the police department, to the ones that were and are in the military, and to the many people that do volunteer work.    Thank you!!!

Is hard to believe that this happened 8 years ago.

This morning I heard that the fires here in Southern California were 70% contained.  that is great news!   Our firemen  and all the ones that came down here have done an excellent job.   I am glad I got to tell that to a few firemen the other night as I was coming out of Dodger Stadium (there was a small fire outside the stadium).  Their response was “Thank you Ma’m”  “Did the Dodgers win?”  They did win that night!.

Driving on the Foothill freeway you can still see some smoke from the lingering fires.  We are so due for rain here.

A friend sent me this link from Boston.com   They have some incredible pictures here

I went to Virginia’s blog  and saw her final list of the N.L. West Cuties!  It reminded me of this photo of Andre.  What do you think Ethierholics?

This picture was taken at the Carne Asada event last  this year by my good friend LuvtheDodgers23.  thanks LTD23!

Andre is leading the team in homeruns with 28, Doubles with 39 and is tied with James Loney with 60 walks.

Hiroki Kuroda is on the mound tonight in San Francisco!  He faces Matt Cain.