I was at the stadium last night and I was asking “Why the low attendance with the Dodgers in first place with the best record in baseball and Kershaw on the mound?” Well, I had forgotten the Lakers were playing. I kept getting quite a few tweets “Laker’s in playoffs” But Magic Johnson showed up at Dodger Stadium! I had my scorebook signed! I had him signed it on the sheet of the first game the new ownership took over. Stan Kasten had signed a few days earlier.

Dodgers have a five-game winning streak going. Also they had four sweeps this year. Is only a two game series with the D-Backs so will tonight be five sweeps? I will be ready with my little broom. The people sitting in my section look for my broom. They look back and ask me “Where is the broom?’

I forgot it once time so I had to improvise and make one out of paper napkins.

MikeSciosciatragicillness got a campaing going to vote for AJ Ellis to the Allstar! Great idea! Here is the buttom they created and the hashtag #AJ2KC.

Dodgers had to wait a month to face the Giants. Dodgers won the first game on Monday. It was such an electric day there with the new owners and Magic Johnson there.

Here are the new owners:

Lots of media there. Here is Rachel Robinson at the game: 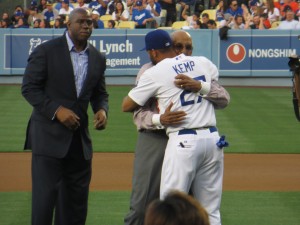 Short post. Heading to the stadium. Will meet R.J. Breisasher. If you see him at the stadium say hi to him. Here is a picture of at Citi Field with Tommy Lasorda:

I kept getting texts that I was on TV.

Magic was at Opening Day in San Diego along with Frank McCourt & his GF.  This picture taken by my friend Lorena (LuvtheDodgers23).   Notice Frank’s GF eyeing Matt Kemp

I was having a hard time with my camera.  Jon SooHoo of Dodgersphotog.mlblogs.com told me I bounced the camera too many times.  Actually it started working better after I had him look at it.   Still, I did not take good pictures from afar but luckly my friend Lorena  did so I am sharing  her pictures:

Opening Day at Petco.  Second time Lorena and I go to Petco Park Opening Day against the Dodgers.  First time was in 2009.

SkinnySwag!   Dee Gordon.  I saw him after the game and I told him I have him in my fantasy Baseball team.  He said “I am not doing too well”   I said that is OK, to early.  Lorena pointed to her heart and said “We Love you!”   The following day I saw him again after the game and he had done so good that I stopped him and excitedly I told  him “You did great today Dee!”  He in turned gave me a hug and told me “Thank you ma’am”   that so cute of him.

Clayton Kershaw was fighting the stomach flu but he insisted to Mattingly that he still wanted to pitch on Opening Day.  He could only go three innings because of the stomach flu.    He also collected the first hit for the Dodgers with a double.   his ERA:  0.00 and his batting average:  1.000.

Because of the day off today, Kershaw is starting the Home Openner tomorrow afternoon.

Josh Lindblom came in after Kershaw and collected the win.  Javy Guerra got the save.  Thanks Lorena for the pictures.

This picture from Jon Soohoo of Dodger fans making the trip from LA to Petco Park.  This is before Friday’s game.

Lorena and I.  ‘yeah, I did not noticed before that I closed my eyes.

The LA Times Sport section has an article this morning titled “Icon to Icon”   by Steve Dilbeck.  This brought a smile to my face knowing that Magic Johnson reached out to Vin Scully.  Quoting article “It was interesting,” Scully said.  “When the phone rang and I picked it up, I recognized that voice.  And, as I told him “If  it’s possible, I can hear your smile.”   Johnson tweeted on Thursday “Last night I reached out to Vin Scully & acted like an excited little kid speaking to the LA Icon.”

Future team president Stan Kasten also called Vin Scully.   The next day Magic also tweeted this “Just spoke to legend & HOF Sandy Koufax.  Thank you so mch fo taking the time to share some of your vast baseball knowledge.”   IF I was part of a team buying the Dodgers, those two would have been on my list to call.

Look at this cake that Magic Johnson posted on hisWhoSay page  on thursday 3/29/2012  saying “Thank you to AEG, Staples Center & the Lakers for this incredible Dodgers cake they made for me,”

More good news as reported by Bill Shaikin of the LA Times:

This is a quick post as I am getting ready to go to Ventura.  I am meeting with friends  for a Girls night out.  We are staying Saturday night and coming back Sunday.  These are some of my non-baseball friends, well with one of them I used to have a Dodger mini package in the field level for two years.  In fact, after we stopped having the mini package and I started having season tickets, I would always invite her for Opening Day.  Last two years she has not been able to to go.  Anyway, they are understanding that once baseball starts I am not available.  I tell them “look at a Dodger schedule to see if I am available”  Even then, I might be on a road trip.   The last time they invited me to a get together for “Poker night” back in January, it happened to be the Saturday for “National SABR Day”   Looking forward to this trip and then get ready for the road trip to San Diego for the four game series!

I heard Vin Scully refer to Dodger Stadium as the Magic Castle!  Well, the Magic Castle just got some extra magic!  Is Magic Time at our beloved OLOCR _Our Lady of Chavez Ravine!

As reported by http://mikesciosciastragicillness.com/ ” Mark Walter, CEO of Guggenheim Partners, is the new controlling owner, and the group includes film producer Peter Guber, baseball Stan Kasten, and Bobby Patton & Todd Boehly of Guggenheim. Magic’s the public face, Kasten’s the baseball guy, and Walter is the controlling interest. It may not seem like an important distinction, but it is, though it’s fair to note that Walter is not expected to be a hands-on owner in the Steinbrenner or Cuban tradition.”

Earvin “Magic” Johnson stated, “I am thrilled to be part of the historic Dodger franchise and intend to build on the fantastic foundation laid by Frank McCourt as we drive the Dodgers back to the front page of the sports section in our wonderful community of Los Angeles.”

We are thrilled to have you be part of the Dodgers,  Magic!   All I can say is

Jeanie Buss tweet to Magic Johnson:  Congratulations Magic-sign me up for season tickets!