By now everyone has seen the video of Matt Kemp giveaway gifts to a cancer striken young Dodger fan.  I have seen it many times since yesterday.    If you have not here it is

So in honor of Matt Kemp here are some humbling haikus

Kemp could have walked out
After Dodgers lost series
But Kemp made us proud!

We love you Matty!

At Kershaw Cy Young Award press conference, Kemp taking the time to pose with me.

Here is Kemp with Alyssa, a beautiful little girl that passed away with Cancer.  Since that happened, Kemp updated his twitter profile picture with a picture with Alyssa.

Kemp stopped by to take a picture with me at the Bluetopia movie premier in 2008. 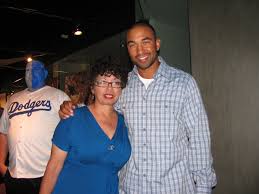 Here is Kemp again posing with me one day I was on the field prior to a game.

The WordPress Weekly Photo Challenge for this week is “From Above” http://dailypost.wordpress.com/2013/05/03/weekly-photo-challenge-from-above/#comments    A picture taken from above.

With the theme in mind I reviewed some of my pictures.  I found this one that I took from above, the  last row of the Top Deck (the last level) of Dodger Stadium.

From above to below the field, Matt Kemp at the plate on a Sunday afternoon at Dodger Stadium.  Note the  shadows, the location of the ball as it makes a hole on his shadow, the umpire in position and the catcher ready to catch the ball.

It is a long way down but I like the view from above.  I see the game, I see the mountains, I get a panoramic view of the game.

Today Tuesday,  May 7, 2013,  the Dodgers find themselves way below in last place in their division.  They need to crawl out and rise above.

I have not been able to post here in Cincinnati.  The connection at the hotel and at the ballpark has been horrible.

We saw lots of cochitos here

Too bad we did not get to say hi to Cochito Cruz, maybe when we get back to Dodger Stadium.   I have yet to meet him.

We wont be at Sunday’s game because of the ESPN time change 😦  There was an Octoberfest festival across from the hotel.
Weather here was very cold.

We won one game and we lost one.  We saw The Reds clinch here with their win.   Next year it will be our turn!

Congratulations to Dusty Baker and the Reds!   Good luck in the postseason.

The fans sitting in the first seven rows of the Right field seats got a nice surprise on Tuesday night when they received free Dodger dogs on Tuesday wrapped like this:

What a nice thing for Andre to do! I was not sitting there but my friend Lorena got the text along with the picture. Thank you Andre!

Dodgers lost three consecutive games for the first time this year. On top of that, Matt Kemp reinjured his left hamstring scoring from first base on an Andre Ethier’s double. I noticed someone getting mad in the dugout but did not realize it was Matt until afterwards. Kemp is back on the DL. Good luck Matt.

Tonight is the fourth game with Chad Billingsley against Greinke. I will be sitting in the Left Field pavilion tonight. I am told the seat is above the milk sign. Looking forward to seeing Deuce, William, Dee, Joe, Ron, Pete and the rest of the fans that sit there.

The next bobblehead has been unveiled today. It is the Eric Karros bobblehead.

Nice! I like it! It is on my birthday June 28, but I will be out of town. Not to worry, brother Vic will collect for me.

Thursday August 30, 2012 is Vin Scully Bobblehead Day! The bobblehead will be given to the first 50,000 valid tickets. Here is the picture the Dodgers posted today:

From email from the Dodgers:
The only way to guarantee tickets to this game, and the Sandy Koufax Bobblehead game on Tuesday, August 7, is with a season ticket plan or the 10-game Flex Plan. Individual tickets will not be made available to the general public. The Flex Plan allows you to pick the games you want to attend during the remaining Dodgers home schedule, with tickets starting at just $11.

Dodgers dropped the first game with the Brewers 3-2. Harang took the loss and Marcum the win.

Is the Infield bobblehead tonight! looking forward to seeing the whole infield of Lopes, Garvey, Cey & Russell all together.

It is also the return of Matt Kemp! You can be sure Dodger fans will be chanting louder “MVP”

I arrived at the first Dodger FanFest at noon. There were a lot of people there waiting for the gates to open. The first thing I did was have my baseball card made. This is my third baseball card but this one has the Dodger schedule in the back. The next thing I did was the Dodger flip book. Basically you put a glove on and pose for pictures pitching, catching while the camera rolls and they make that into a tiny book.

It was already hot so when I saw sosmeone with a paper fan with half of Matt Kemp’s face, I asked where they got it. It is KCAL CBS sponsored with their broadcast schedule in the back. They gave you three rubber baseballs and if you made it thru the big hole you got the fan. If you made it thru the smaller hole you got Dodger tickets. I wanted the fan but I only came close. Lucky for me my brother Victor was with me. He aimed for the big hole and got me my fan! How do I look?

When Mattingly was on stage, I went to the mike and asked him what Lilly had done to get tossed in Chicago. Also I said on the Mike while wearing my Vote for AJ Ellis button (I took the image from MikeSciosciatragicillness blog and glued it to one of my buttons. Mattingly said “yes, I am voting for AJ.

Here is Matt Kemp on stage being interviewed and taking questions.

The longest Dodger infield was missing the iron man Steve Garvey. He had an emergency so only Russell, Cey and Lopes were there. I thanked them for 1981 which was my first year as a season ticket holder and told Lopes that back in 1981 I had given Bobby Welch a greeting card to make him feel better because he was not doing well. He said something like “you don’t know how much we appreciate that when we are not doing well..” That year in December 1981 I received a postcard from Lopes thanking me for my support. I still have it.

Vin Scully also made it appearance! He talked and we listened only with the “WE Love you Vin!” “No, you are Great!”

Next it was Pepe Yniguez, Fernando Valenzuela & Jaime Jarrin. Pepe funny as usual and even Fernando. Jaime great as always.

Earlier I had gone to the section where the Dodgers had the Tommy Lasorda wine tasting. This section was only for season ticket holders. Later on Tommy was going to walk around talking to fans there posing for picures but I had a conflict since it was the same time Vin Scully was going to be on stage. Anyway, after Pepe, Fernando and Jaime appearace on stage, Tommy followed. He was funny, inspirational and full of Dodger Blue energy. He got the crowd going. I asked him “what kind of food I should have with two bottles of his wine I have at home. He said “Save it!” “And when the Dodgers win the World Series I will drink those bottles of wine with you!” 🙂 Tommy: I got plenty of witnesses!

I left in time to watch some batting practice. Clayton Kershaw pitched a great game. He blanked out the Cardinals 6-0,

It was a great weekend for Los Angeles! Lakers, Clippers & Dodgers win! The Dodgers swept the Rockies. The last game did not start well with Lilly on the mound. Then when Matt Kemp had to come out of the game with a sore hammy and then Ethier got kicked out of the game, things did not look good, but AJ Ellis said “no worries” Here I am! Boom! Homerun by AJ Ellis to clear the bases. BTW, Abreau is doing great since joining the Dodgers from the Angels. I believe he has three doubles now. I saw him at second base with a big smile :-).
.
Now here are the Snakes and Dodgers ex-Dodgers VP of Communications, Josh Rawtich returns to Dodger Stadium with his new team the D-Backs. I miss you Josh!

Matt Kemp is out of the lineup today. Rest and Get betterMatt!

Dodgers are in first place and so are my fantasy baseball team, Los Locos Azules.

No batting practice for me today but I am now leaving work and heading to the Ravine. Clayton Kershaw faces Ian Kennedy.

Tomorrow I will be sure to leave early since is Orel Hershiser Bobblehead. BTW, I saw fans get mad yesterday because they did not get an Andre Ethier bag. It said the first 20,000 fans so Dodgers ran out before the game. Get there early for giveaways especially when the number of giveaways is limited.
Go Dodgers!

Dodgers had to wait a month to face the Giants. Dodgers won the first game on Monday. It was such an electric day there with the new owners and Magic Johnson there.

Here are the new owners:

Lots of media there. Here is Rachel Robinson at the game:

Short post. Heading to the stadium. Will meet R.J. Breisasher. If you see him at the stadium say hi to him. Here is a picture of at Citi Field with Tommy Lasorda: