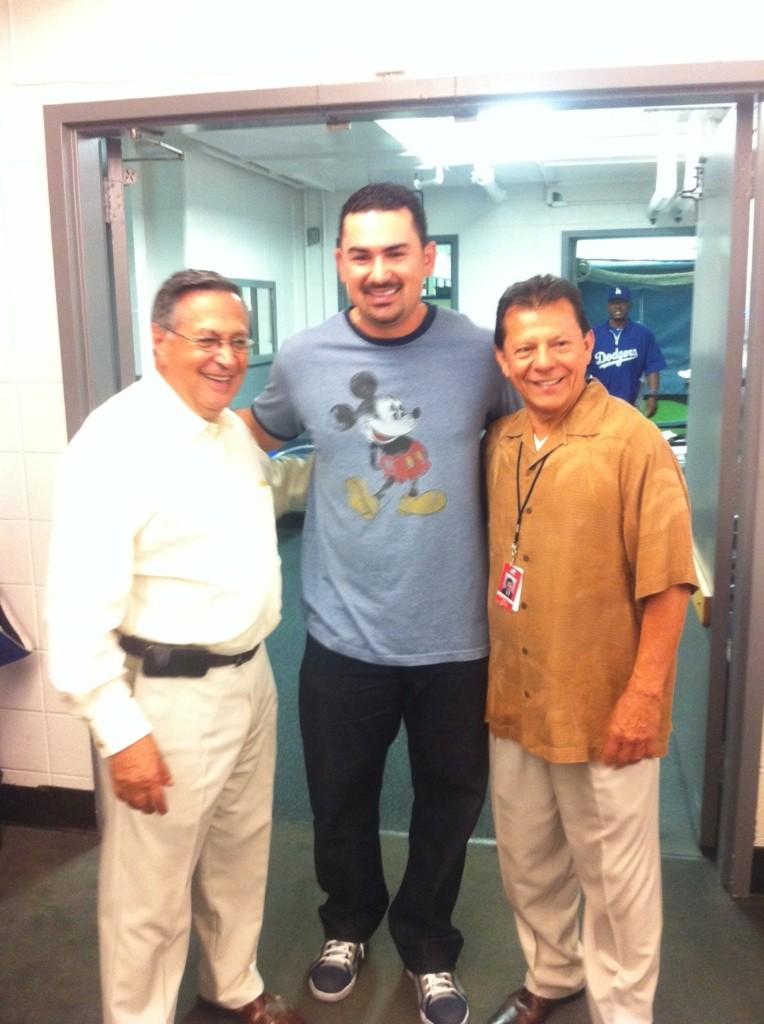 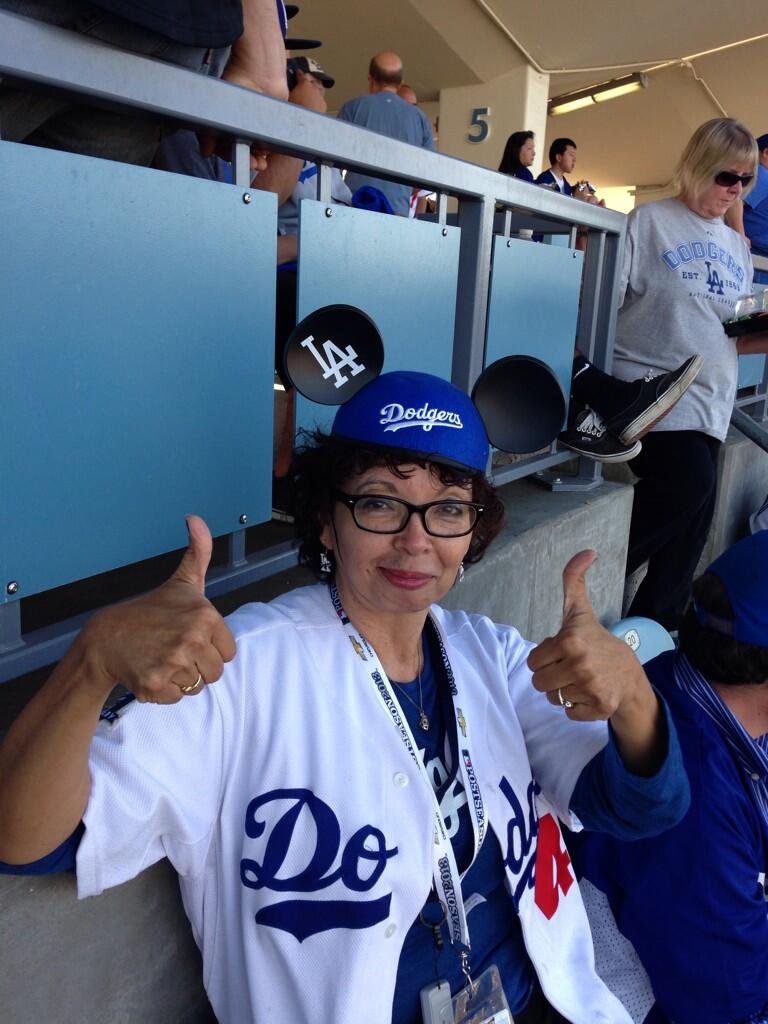 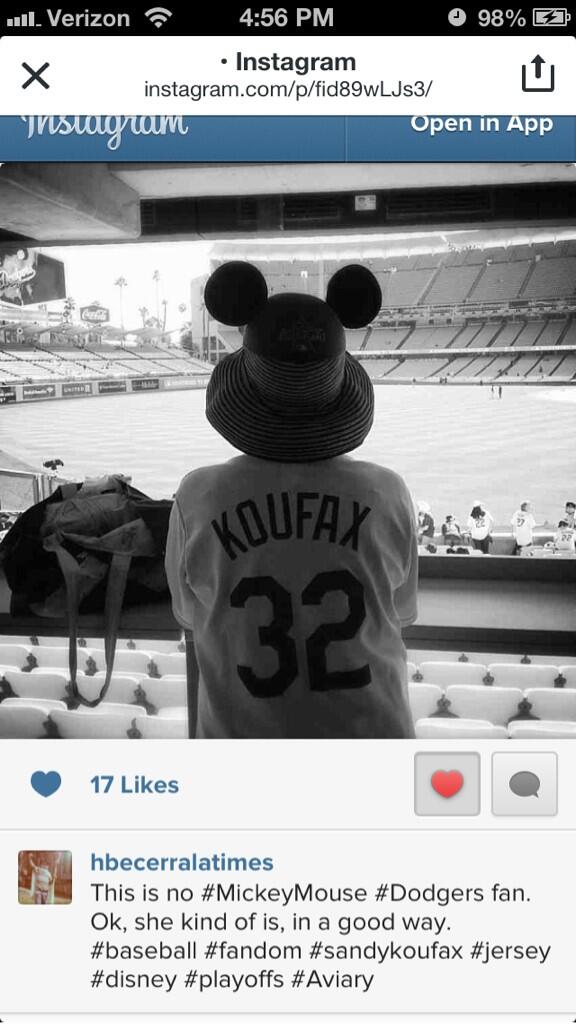 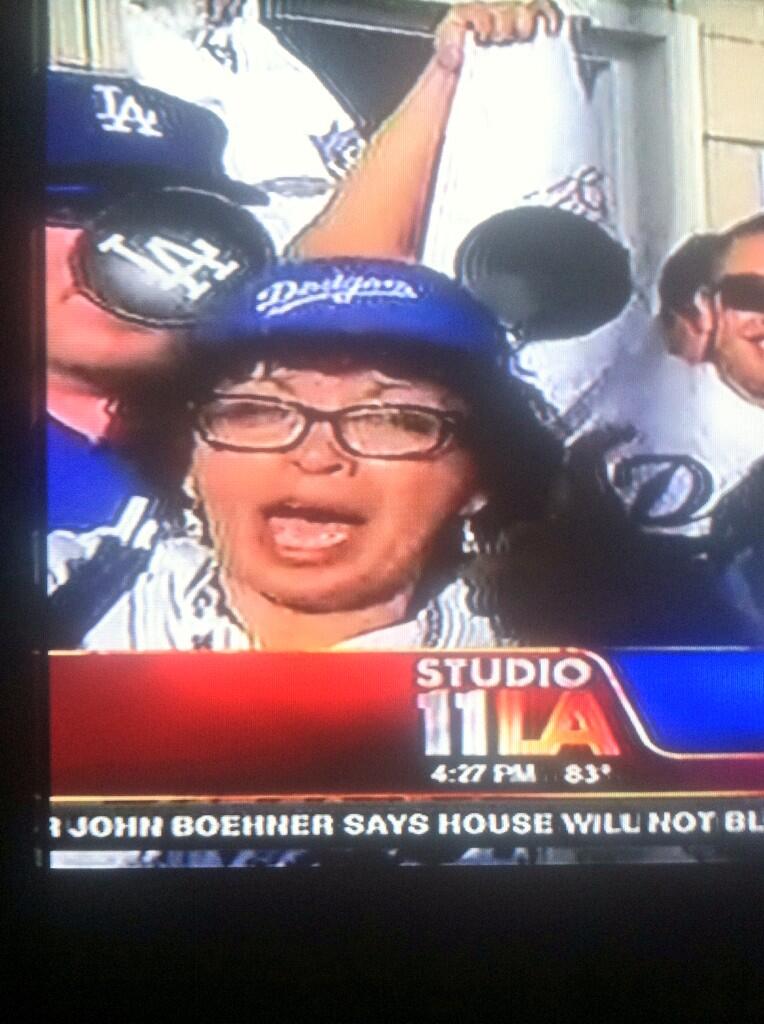 I spent Wednesday at Anaheim going to the orientation session in order to volunteer for the FanFest.

I have the second shift noon to 5 p.m. Friday, Sunday and Monday.  I will try to change Sunday to the 1st shift of 9 a.m. to Noon so that I have time to make it to the game on Sunday.

I left Saturday open since is Photo Day at Dodger Stadium followed by the game.   Saturday is also the Poster Day for the Big Blue Wrecking forum.

I am looking forward to meeting PastorKyle and seeing the rest of the posters of the forum.   There will be other people there as part of the group for those BBWC posters that could not make it.

Thank you BabyToes for putting this together.  Babytoes is also volunteering at the FanFest.  Here is Babytoes next to the All-Star Mickey Mouse:

Linda (behindblueeyes) is also volunteering.  Here she is also posing with the All-Star Mickey Mouse.

The Cubs are at Dodger Stadium for a four game series.   Today is All-Star Andre Etheir action figure.   This is figure two (first one was Matt Kemp).  The last one will be of Manny Ramirez.  It is only for kids 14 and under but let’s see how I can get a hold of one.

They did a video at the stadium of Matt Kemp and the action figure.  I can’t wait to see the one with Andre tonight.

And I can’t wait to see Andre at the All-Star game.  I will be in the right field side, upper deck.

All-Star FanFest in the works.  This guy with the Strasburg jersey is also volunteering.

More All-Star FanFest in the works

Wednesday when I went to Jury Duty in Downtown LA, I noticed that there is this Pittsburg Pirate Mickey Mouse at Union Station.     I had seen one at Anaheim Stadium when I went there for the All-Star FanFest interview.    I did not have my camera that day but Friday I made sure I had it with me.

After googleing about the the Mickey Mouse, I read that there are 36 varieties of statues including designs for all 30 clubs to celebrate the All-Star game here in Anaheim.  I learned that there are three in the Los Angeles.

After work I made my rounds.  First Union Station:

After taking a few pictures at Union Station, I walked to the Music Center in Dowtown.  The walk is uphill.  I should have taken a bus but it was worth it to see the DODGER Mickey Mouse !

In back of that fountain there was a huge group of people dancing with an instructor on stage teaching Indian (from India) dancing.  Yep!  I joined in!

Here is another picture of the Dodger Mickey Mouse

Here is the back of of the Dodger Mickey Mouse

OK, so after doing some dancing (or trying to follow the instructor with the dance moves), I headed to the third Mickey Mouse that is in LA.

The LA Live is next to the Staple Center, home of the 2010 World Champion Lakers!   A few blocks away from there is the Convention Center where they are having the Anime convention.   I’ve never seen so many costumes!  I took a picture with this guy

It was sad to read that the Red Sox Mickey Mouse that was somewhere in Anaheim, was vandalized.  His arm is being repaired.

I’ll try to go take pictures of the ones that are in Hollywood sometime this weekend.  They have Royals, Reds, Indians, Mariners and Phillies.   I have pictures of the the Pirate and Yankee Mickey Mouses also if anyone likes me to post them, let me know.

Contratulations to Gibby on his first win as a manager.  Now Dodgers go take the next two!

Thank you all that read my blog and comment!  I made #17!  Woohoo!   When I think of #17, I think of Carl Erskine!    I admire Oisk!  That is why a few years back I purchased a baseball with his signature at Dodger Stadium.    On the baseball he wrote the date of his no-hitters.