I love this old  interview!  Long time Spanish broadcaster Rene Cardenas interviews Mike Scioscia in Spanish.   I love hearing Mike talk in Spanish.   Mike Scioscia used to be one of my favorite players.  I loved how he blocked the plate.   I used to sit behind homeplate in the Loge level.   There was an older lady sitting behind me that like me, used to go to the games by herself.   Whenever she was not at the game because she also had tickets to the Lakers, I used to buy her ticket so that I could take one of my little cousins to the game.

I did not know how well Mike speaks Spanish.   Unlike now, back then I only used to listen to the games in English.

Here is the interview:

I was surprised that again I came in at #14 for the month of February in the latest MLBBlog latest leaders.

Great!   Thank you those that visit my blog and those that found it while searching something I had here!

Last month when I came in at #14 for the month of January I dedicated the post to Gil Hodges.

This time I will dedicate it to #14 Mike Scioscia!

A skinny Mike Scioscia with a skinny Tommy Lasorda

I got this signed by Mike prior to a game. 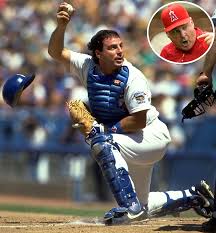 Mike was the best blocking home plate!  I sat behind home plate in the Loge level for two years (1981 & 1982) watching him play. 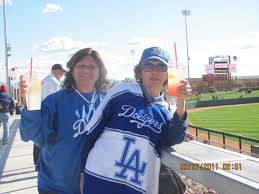 Here ist to you Mike!  Wish you were still with the Blue!

I am missing my lemonade from Camelback Ranch

Again, thank you everyone that stops by here.  Thank you Mark for doing the Latest Leaders list.

Dodgers lost the first game with the Angels 3-2. Isringhausen won it and Kenley Jansen lost it. Kenley is in my baseball fantasy team, Los Locos Azules.

BUT! we know pitchers got to have a short memory. Kenley came back on Tuesday and won the game. Dodgers were trailing on this one but with the score 2-2 (after Ethier tying the game), ex-Angel Juan Rivera went Boom! with a 3-run homerun! We went crazy at the stadium!

It was also Mike Sciocia’s bobblehead night. I don’t think the bobblehead resembles him but I am glad to have it. Scioscia used to be a favorite of mine back when I started attending games. Always had a soft spot for catchers and pitchers.

Not a good day for honorees at the ballpark since Jaime Jarrin who was honored the night before did not get a win for his team. But it was a special night with all the tributes paid to Jaime Jarrin.

After throwing out the first pitch along with his son Jorge Jarrin and his grandson Stefan Jarrin, Jaime went to the mike to say “It’s Time for Dodger Baseball” but first he said it in Spanish “Es La Hora de el Beisbol de los Dodgers”

Another person that threw out the first pitch was the Veteran of the Day. Dodgers honored a Veteran every day. This time it was 102 year old Bea Cohen, the oldest living female World War II Veteran.

Monday was also the day the Kings won the Stanley Cup! 50,559 showed up at Dodger Stadium even with the Kings playing at Staple Center.

First of all, Congratulations to the Phillies and Yankees on advancing.   Reds and Twins just look like innocent bystanders.    Is a shame, because I wanted to see closer series.

Did you all catch the Simpsons episode Sunday night titled “Moneybart”?    I thought it was funny.  Bill James voice says “I made baseball as fun as doing your taxes”    Mike Scioscia’s voice is also in the show.  He is riding a roller coaster with Bart when he shows him his three World Series rings, he loses one and says “that is OK, I’ll get another one.”

Lisa has taken the added responsibiliy of managing  “The Isototes”  to get extra curricular actitiy.  Bart doubts his sister can manage.  Lisa anticipating that says “There have been plenty of females managers in baseball:  Connie Mack, Sandy Alomar, Terry Francona, Pinky Higgins.”

This reminded me of John, a friend that used to sit in front of me in the Top Deck at Dodger Stadium.  He told me once “Didn’t the Dodgers used to have a woman that broadcasted Dodger games in Brooklyn?.”   I told him no.   Then he said “yes they did, her name was Connie Desmond.”   Linda(BBE) and I started laughing so hard when John said that.

Here is a link of the episode if you have not seen it.