Tim Wallach will be interviewing for the manager position with the Red Sox.

If Wallach  leaves how about the Dodgers offering Alex Cora the third base coaching position?

I think Alex Cora would make a great third base coach.   He has a great baseball

From this article from Jonathan Mayo:

Other players in his position, nearing the end of a robust career and working to win a roster spot, might take a more me-first approach to Spring Training. Yet Cora has been tireless in his efforts to mentor young infielders like Jackson throughout the spring. It’s a pay-it-forward attitude that is very much appreciated by the mentees.

Having a coach on the field like Cora is a good thing for any manager, and perhaps an even bigger bonus for a rookie skipper like Matheny. In the short time they’ve been together this spring, Matheny already sees a future path for the veteran, one Cora’s older brother has already taken.

“That’s Alex’s makeup,” Matheny said. “I know it’s something our veterans have a desire to do, to help out our younger players and figure out how they can pass on some of the things they know. You can see he’s wired, he can be in this game for a long time instructing and teaching if he desires to do so once he’s done.”

Cora appreciates the kind words, but he doesn’t want to dwell on his coaching bona fides just yet. Perhaps it’s something that will come down the road, but it’s clear he’s not ready to talk about career changes just yet.

“I appreciate that, but the less I talk about [coaching], the better it is for Alex, the player,” Cora said. “I take it as a compliment, but I really don’t want to cross that line yet. I still want to play baseball. I still feel I can contribute.”

Wow!  I thought the Oakland A’s were done but they hit a walk-off to force another game so again tomorrow we will have four game!   I love baseball!   Let’s play four tomorrow again!  Loving the MLB PLAYOFFS!

Lorena was reminding me of the time we went to see a Dodgers Spring Training game then after the game we headed to Las Vegas to watch the Dodgers play the next day against the Chicago Cubs.  At Holman Stadium, there was this Cubs fan  guy sitting in back of us saying “I hate Loney!”  He is a Cubs killer!”

James Loney hit a grand slam off Ryan Dempster in the fifth inning. It gave the Dodgers a 4-2 lead.

Cubs center fielder Jim Edmonds watching James Loney’s grand slam in the fifth. It gave the Dodgers a 4-2 lead in Game 1 of their series

Video of signing the Loney song to Loney here  http://crzblue.mlblogs.com/2011/03/21/follow-the-dodgers-from-la-to-az-to-nv/

I was watching the first game with the Marlins from the Field level when a friend alerted me that James ‘s dad was sitting in our row in the late innings.  I headed upstairs to say hello to him and wish James Loney good luck thru him.  I had a little chat with him.  I am not going to repeat everything he said but basically he said that James probably needed a change.   Raissa is in the picture.  She used to be in the Loge area where the Dodger family sit.

We saw James go out on the field at the conclusion of the game to celebrate with the team the win.  Afterwards his hand went to his face.  Got a little emotional then.

I have followed these kids careers since the minor leagues.  I remember seeing James Loney at Vero Beach.   When a couple of guys from the ITD (InsidetheDodgers) blog (blog is no longer being updated) came up with the Loney Song, my friend Erik and I started signing it to him at Dodger events, at Dodger Stadium, at Spring Training, on road trips.

showing James a picture Lorena took of James Loney’s dad and I in Fenway Park.

One of the best Dodger Caravans was at Panda Inn in Pasadena where the Dodgers were our waiters.   Lorena, Erik, a friend of Lorena and I had James Loney and Pepe Yniguez as our waiters although the person that brought us our food was Andre Ethier.   This was in 2008.  I remember James Loney asking us “Is there anything I can bring you guys?’  “Do you guys want a photograph, an autograph?”   We were just so happy to be there and having him as our waiter.  My picures ae stored elsewhere but here is a picture I found online

Farewell James, thanks for the memories and being nice to us fans.  Play well, give your best!  No slacking off.

At  a Photo Day 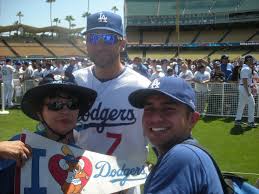 At one of the Dodgers caravans 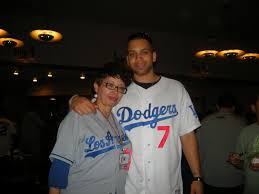 Thank you for your work in the community James!  Be good! 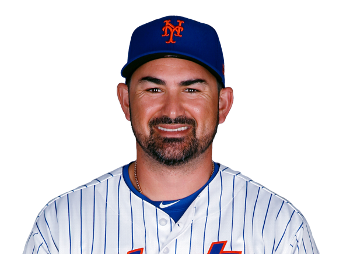 That was painful getting swept by the Angels.  But at least Sunday, I can see some players getting out of their slump like Manny, Raffy and Loney.  Now when Kemp, Ethier and the beared one join in, watch out!

This picture was taken by Dodger photographer Jon SooHoo.  Thanks Jon for a wonderful shot!

Weaver had to come and bat against Jerred.  Jerred in turn came to face Jeff.   Originally they were not supposed to face each other but with Monasterios failing to make it passed the 3rd, inning, in came in Jeff Weaver.

Now the Dodgers are on the road to face the Cincinnatti Reds for three and then is off to Boston!   Don’t look ahead to the Red Sox boys so play well in Cinci.    I’ll see you all in Boston!  Go Dodgers!

Three more days till my friends and I head to Boston!  I talked to Manny Sunday and told him that I hope he plays well in Boston.  He said “Si Dios quiere”   “Se lo dejo todo a Dios”   “God Willing”  “I leave everything to God”

Here are our tickets and the Dodgers polo shirt that we got included in the Dodgerslife event.

When we went to Mesa to watch the Cubs play against the Dodgers, the game got rainout.

so what did we do?  We headed to the American Museum of Youth (AMY)  a few blocks away (Although we did not know it at the time so we took the long way there.  I think we took the freeway there :-)).

Women Softball teams in the 40’s.  Why was this team called the Cantaloupes Queens?  Because they were sponsored by a Cantaloupe growers.  A young woman named  Rose played with the Queens.  Rose Mofford later became Arizona’s governor!

Wish I had that 1988 World Series yellow  button when the Oakland A’s faced the Dodgers!

The Cubbies who used to play Spring Training in Catalina Island before Mesa, Arizona

Grapefruit signed by Sammy Sosa in 2007 and then freeze dried.

We were glad that we found this museum close to Hohokam Stadium in Mesa!

I am going to Boston to watch my beloved Dodgers!!  Woohoo!

My friend LuvtheDodgers23 (Lore), her niece and I will be in Boston in mid June to cheer our beloved Dodgers!   We are doing the DodgerLife event!

Thanks Lore for making the arrangements.  I will look into flights tonight!

Hit the Road with the Dodgers in 2010!   The package include hotel, exclusive Dodgers brunch, game tickets to all three games, a tour of Fenway Park, and a Dodgers Road Trip Polo Shirt.

I have been to Fenway once when after a business trip in N.H., I stayed in Boston on a Friday night so that I could see Fenway Park.  I saw the Tigers that Friday night.   I wrote about it here in a too long post.   http://crzblue.mlblogs.com/archives/2009/06/my_trip_to_fenway_park_82605_a.html

Funny that when I was in Toronto for a few days taking a class, I happen to catch the Red Sox at Roger Centre.  Again, I made the trip by myself to catch me a game.

Ok, on to look for flights.

A free grilled Dodger Dog, hanging out with friends at Dodger Stadium and a Dodger WIN!  What could be better!

Dodgers won the opener with the Pirates 6-2!

Magic number is now 14.  I always think of a Dodger player when I look at number so here is one of my favorite Dodgers back when:

Today is Blanket night!   This is what it looks like

Today is Honduras Independence Day!  Some of you might know that I was born in Hondura.s

Tomorrow is Mexico Indepedence Day!   It is also a day game at Dodger Stadium with Manny’s bbh.

Happy Independence to Mexico and to all my Mexican friends and friends that have Mexican heritage.

Happy Independence to Fernando Valenzuela, Pepe Yniquez, Juan Castro and also to Andre Ethier because of his Mexican heritage.

I’ll leave you with this video from Andre Ethier’s Carne Asada day.   It has Mexican music and Andre says a few things about his Mexican heritage.

Oh My!  there so many cool videos there.  Andre! You got me hungry with the one at L.A. Live!   That macaroni with trufles and three kind of cheeses sounds outstanding.

Super exited about the 2010 MLB schedule!    Dodgers get the Yankees at Dodger Stadium and they get to go to Fenway Park.   This is how the interleague schedule looks like

I smelled a road trip to Fenway!   I need work to send to New Hampshire during that week in June and then I can stay in Boston for the Dodger series!