It sure did not look like the Dodgers would defeat Lincecum on Wednesday May 9, with Billinsley's shaky start. But defeat they did. Dodgers trailing 2-0 came back with four runs in the fourth. Lincecum went five innings and Billinsley only four so Jamey Wright picked up the win.

Earlier during batting Deuce was playing catch with Jamey Wright.

Hey Jamey, you should always play catch with Deuce!

This was the day I was meeting Army veteran RJ R.J. Breisasher. The Dodgers had given us two tickets for the game. RJ underestimated the LA traffic so he was running late. We made it to our seats during the first inning. Here was our view from the seats:

Another picure of Lincecum facing Ethier. 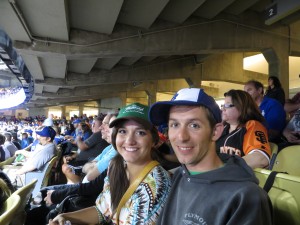 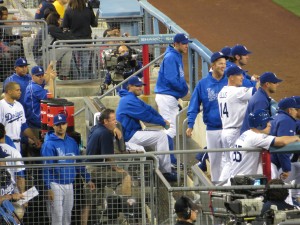 Dodger dugout. One of the reactions from Scott Van Slyke’s major league hit.

There were three triples in the game. One by Dodger catcher AJ Ellis. I love watching triples! AJ also had an infield single! 🙂 What were the odds that a catcher would end up with a triple and an infield single? I love this game! 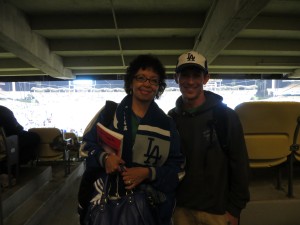 RJ Breisasher and I after the game.

We went back to the top deck after the game. Only the cleaning crew were there. 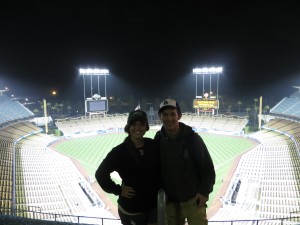 RJ, on behalf of the Dodgers and myself, thank you for serving our country.
Rachelle: Pleasure meeting you.

Breishaer is a United State Army veteran who had a dream to travel to all 30 ballparks. Here is part of what he says in his blog:
“My dream is rather simple. I want to see every major league baseball park in the US and Toronto. I want to drive from park to park experiencing all that the US has to offer. I want to see the country I’ve spent two years of my life defending. I come from a small town on Michigan Ohio border and haven’t really seen too much of the US.”

To read more of his blog and the parks he has already visited go to
http://baseballdreamin.blogspot.com/

Breishaer had posted in Baseball-fever asking in as many team’s forums who wanted to be a “tour guide” in their own city. I checked the date (May 9, 2012), checked his blog, found him on Twitter and told him that if he did not have anyone for Dodger Stadium that I could be his “tour guide” He twitted back “the job is yours”

I am looking forward to meeting RJ Breisacher. His dream is ambitious of visiting all 30 stadiums in 2 months! Breishaer is a huge baseball fan and a Tiger fan. His trip started at Comerica Park on Opening Day and will end there. Last time I checked he was in Arizona. He got a speeding ticket. Should have warn him about AZ as some of you know that I got 4 tickets there during Spring Training a couple of years back.

Here is a picture of Breisacher at Cleveland (from DTTWLN)

update: fixed link. Don’t know why it was not working before.