I started reviewing my pictures to see what I could use for this week’s Photo Challenge: Lost in the Detail http://dailypost.wordpress.com/2013/03/01/weekly-photo-challenge-lost-in-the-details/

I found these pictures when I took a road trip to Seattle with friends Lorena & Rosie to see the Dodgers last year.

We were taking pictures of the Chihuly Garden and glass

At the Chihuly Garden and Glass when I spotted a bee.

I am afraid of bees but I stayed there taking the picture. 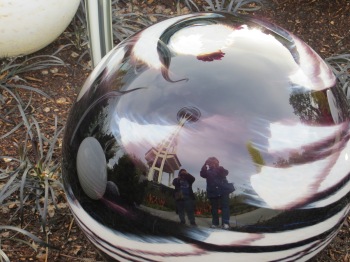 I also took this picture aiming low at the reflection of Lorena and I taking pictures.

Lorena, Rosie and I got back to LAX at 11:30. Lorena had parked near by so she had to take a shuttle there. Rosie and I had taken the Flyaway so I gave her a ride home once I picked up my car at Union Station. My alarm at 5 AM came on way to early!

Shower & coffee were not doing their thing of keeping me awake

But I got in to work with window and Sunroof open to keep me awake. It is all worth it though! I had a great time in Seattle!

After the 1-0 no-hitter on Friday the Dodger bats came alive! They score eight runs on Saturday and another eight runs on Sunday for the scores of 8-2 and 8-3. We were fanatically happy with the results!

Congratulations to the Dodgers on an excellent road trip that saw them go 8-2.

Lots and lots of Dodger fans at Safeco Field. I am in this picture from Jon SooHoo. 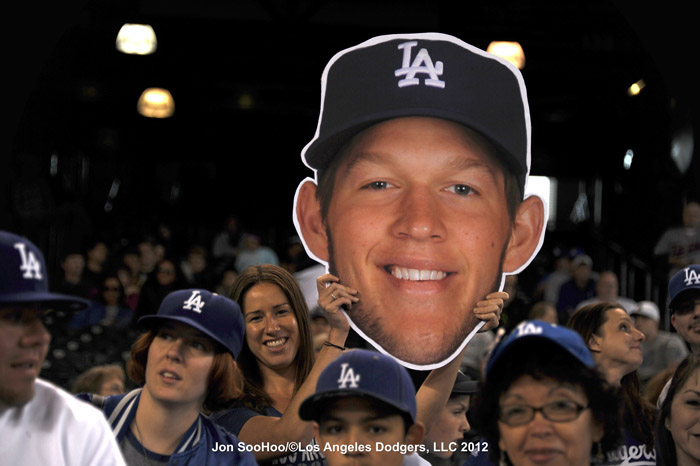 And here is my friend Lorena in another of Jon SooHoo’s pictures. Sometimes you never know when he is taking a picture

Here is a picture from Jon SooHoo of some of our friends that made the trip. In it Kevin & Dee

I wanted to include more pictures but I have not had a chance to upload my pictures.

So on June 8, 2012 Kevin Millwood and five Seattle relief pitchers tossed a no hitter. The no-hitter witnessed by my friends and I at Safeco Field, tied the major league record for most pitchers used in a no-hitter.

Can you imagine that after the game I found another ticket a “fan” dropped and found several paper tickets on the floor. It could have looked for more. Here is my ticket:

The last time the Dodgers went hitless in nine innings was against the Atlanta Braves’ Kent Mercker at Dodger Stadium on April 8, 1994.

We will be back today Saturday when Kershaw goes to the mound. It is a FOX game of the week. I hope the Boys in Blue hit.

A big congratulations to the Dodgers on sweeping the Phillies. This team does not give up. I am so proud of them!

Lorena, Rosie and I arrived at about 11 AM in Seattle. Other friends from Dodger Stadium are also here. We heard from Kristin and Mike. Dee & Kevin are on the way. I just read that Mike from Baseballbetweenus.com is also here. We went to the Space Needle. We also went to the Dale Chihuly Center and Garden Glass Museum. We did a lot of walking today and tomorrow is on to the game.

Dodgers are on the road on a 10 day road trip. They split the first two games in Colorado. Today the game is at 12:10. Nathan Eovaldi goes against Alex White. Then is on to Philadelphia for a four game series. They finish the road trip with a three day weekend in Seattle and that is where I will be with Lorena & Rosie. We leave Thursday morning. 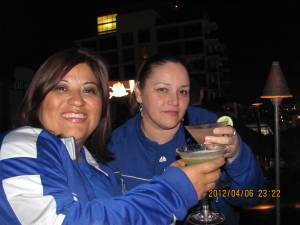 Here is Lorena & Rosie from our trip to San Diego. We are cheering on the nice Dodger start at Petco Park. See you at the airport ladies!

SABR 42Convention
I will also be going to the SABR convention in Minneapolis June 27 to June 30. I will be rooming with my friend Abby who I met last year at the SABR convention in Long Beach. After meeting Abby who is a Yankee fan and Kent who is a Red Sox fan, the three of us hang around together for the rest of the conference. Looking forward to seeing Abby, Kent and the rest of the SABR members attending.

I went last year to Minneapolis during the same days when the Dodgers played there. I spent my birthday there with Lorena, This year Abby and I will be celebrating our birthdays there.

I contacted SABR member Emily who I met last last year at the SABR convention in Long Beach. I also saw her at the SABR Fall League conference. She is a Mariner fan so I am hoping to see her at Safefo Field. Emily is the one with a soda drink. Her mom next to her. The lady in back has a teenage daughter that is so much into baseball & SABR.

I miss my boys in Blue. The last game at Dodger Stadium with the Brewers, I spent it in the Left Field Pavilion. I had a blast there with friends. Thanks Ernest for the ticket! Here is a picture that Jon SooHoo took a few days ago. Here is Deuce, brother Vic to the right of me and Ernest in the back. Deuce & Ernest sit in the LF pavilion.

Here is a group picture from the LF pavilion 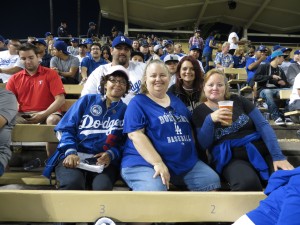 Maybe in between Seattle & Minnesota I can sneak a quick trip to Oakland. Dodgers play there in the middle of the week middle of June.

In the meantime It’s Time for Dodger Baseball!

10 days.  Hall of Famers that wore # 10 and they have had their number retired are :  Sparky Anderson, Phil Rizzuto, Andre Dawson & Ron Santo.

I was listening to Jaime Jarrin and Pepe Yniguez broadcasting the Dodger game on Sunday.   It was odd that there was no English transmission.   Anyway, Pepe mentioned that Ron Santo never saw a no hitter.   Pepe also mentioned that he has never seen a no-hitter.  Neither have I.  I have seen them on TV but never in person.

As I was going thru the retired numbers per team, I noticed that Seattle and Colorado are the only teams that have never retired a number.   Both teams have numbers out of circulations like #24 Ken Griffey Jr. and #14 Lou Piniella.  For The Rockies, no one has worn Larry Walker’s #33, but probably  #17 Todd Helton will be the first number retired for the Rockies.

P.S.  After a year in hiatus, I am back to playing Fantasy baseball!   So my team, Los Locos Azules are back!!   I drafted last but I am happy with my team. Here is what I have:

Took this picture back in December when we went to Dodger Stadium to do a little Christmas shopping.   We thought it was funny finding these two t-shirts in the box.

My friend LTD23 and I settled on the dates we will be at Camelback Ranch!  We will be there the first weekend in March and the last weekend of March.   YIPPY!!!   I can’t wait!

Just found out that Roberto of from Vin Scully is my Homeboy  is battling some health problems.  He said he had about 6 blood tranfusions and the doctors don’t know what it is.   My thoughs and prayers are wtih you Roberto.   Hopefully the doctors will find what is wrong and you can get off the D.L.