In response to The Daily Post’s weekly photo challenge: “Reward.”  I am a baseball junkie. I LOVE Baseball!!  What better reward to a baseball junkie like me  who had a long winter than to watch her Boys in Blue return?  Spring Training is our fix!!

A reward is watching Clayton Kershaw throw again. A reward is getting an autograph from Dodgers future like shortstop Corey Seager

Ahhh.  I’ve been waiting for this day!   The first Dodger Spring Training game!  So

like the apron says “The Heck with housework!   Let’s see the Dodgers Play!”

Yesterday was also the launch of the Dodgers new TV Network: SportNetLA 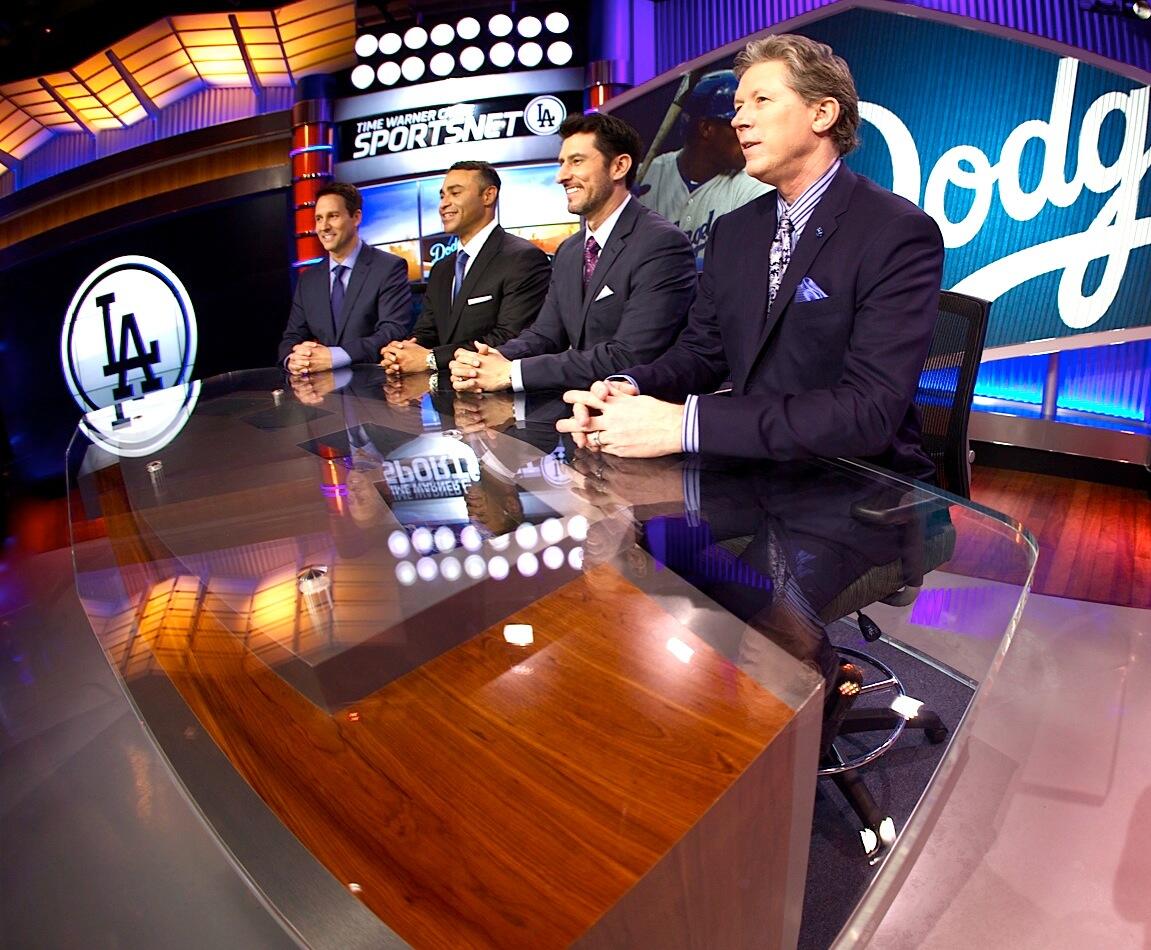 When I got home from work, I spent all the evening watching  SportNetLA until past midnight.  While watching the station.

I also renewed my subscription to MLB at Bat so that I can listen to the game  while I work, at Dodger Stadium and on the road.

Today is 24 days till the Dodgers Opening Day in Australia.  When I think of #24, I think of

Welcome back Baseball!  I missed you!! 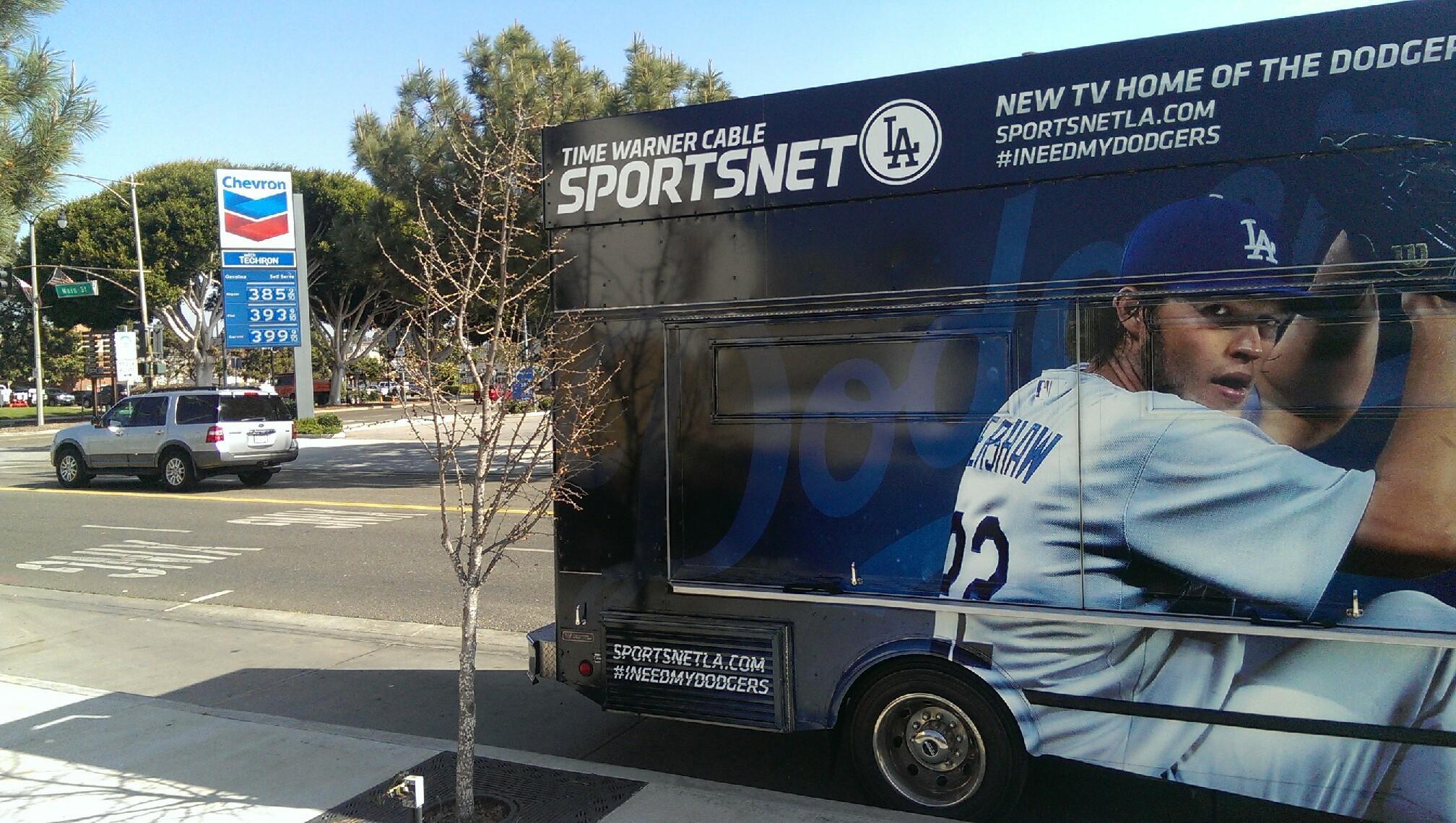 Lunch and Baseball!   Baseball and food, my two favorite things!

Last year I went to Camelback Ranch for the St Patrick’s weekend with friends Lorena and Elisa. 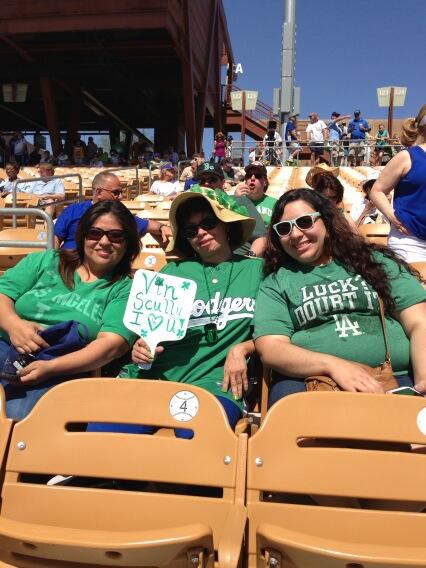 This year the three of us headed that way again.   Lore and I talked that we should make it a tradition to spend St Patrick’s Day watching the Dodgers every year.

After we ran into Pat and Norma.   I seem like I always ran into them on the road. 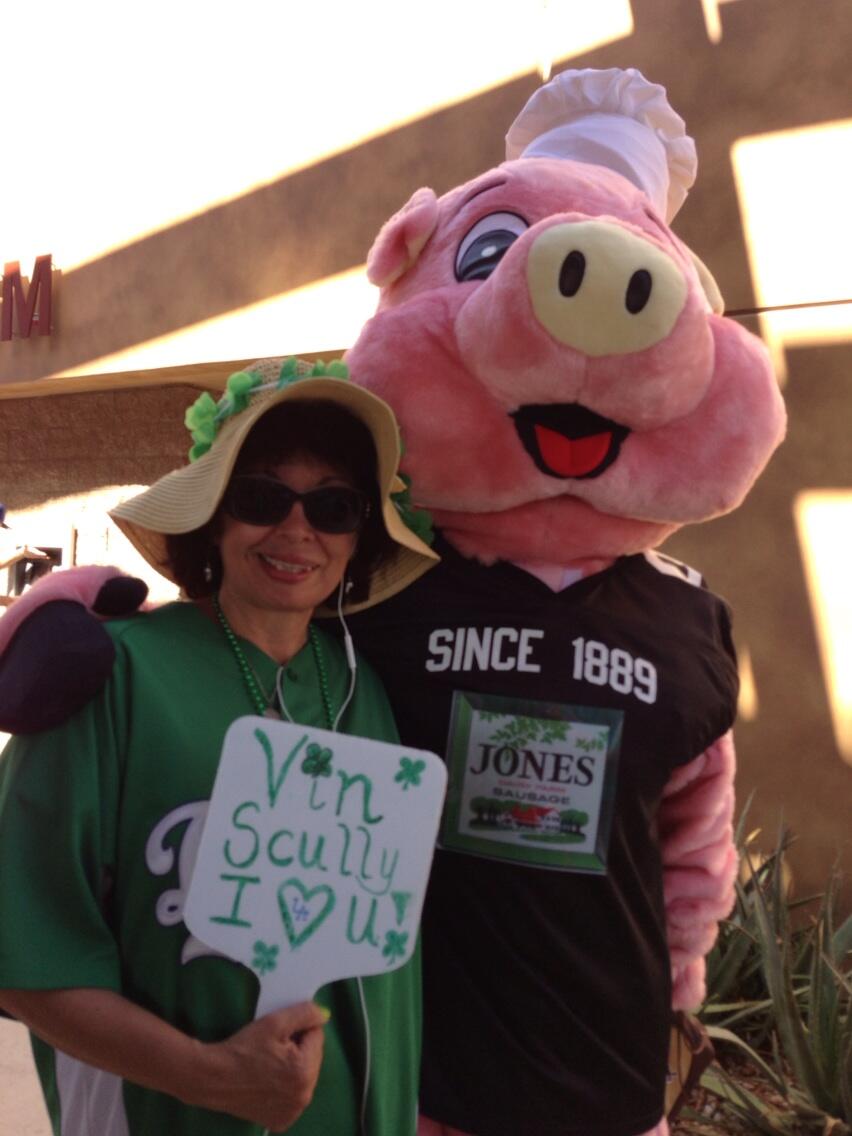 After we ran into Pat and Norma.   I seem like I always ran into them on the road.

Looking for a pic of the birthday girl Margie  but I could not find one.  Also of Randy from Let’s Talk Dodgers and Mary and Art from our Top Deck family. 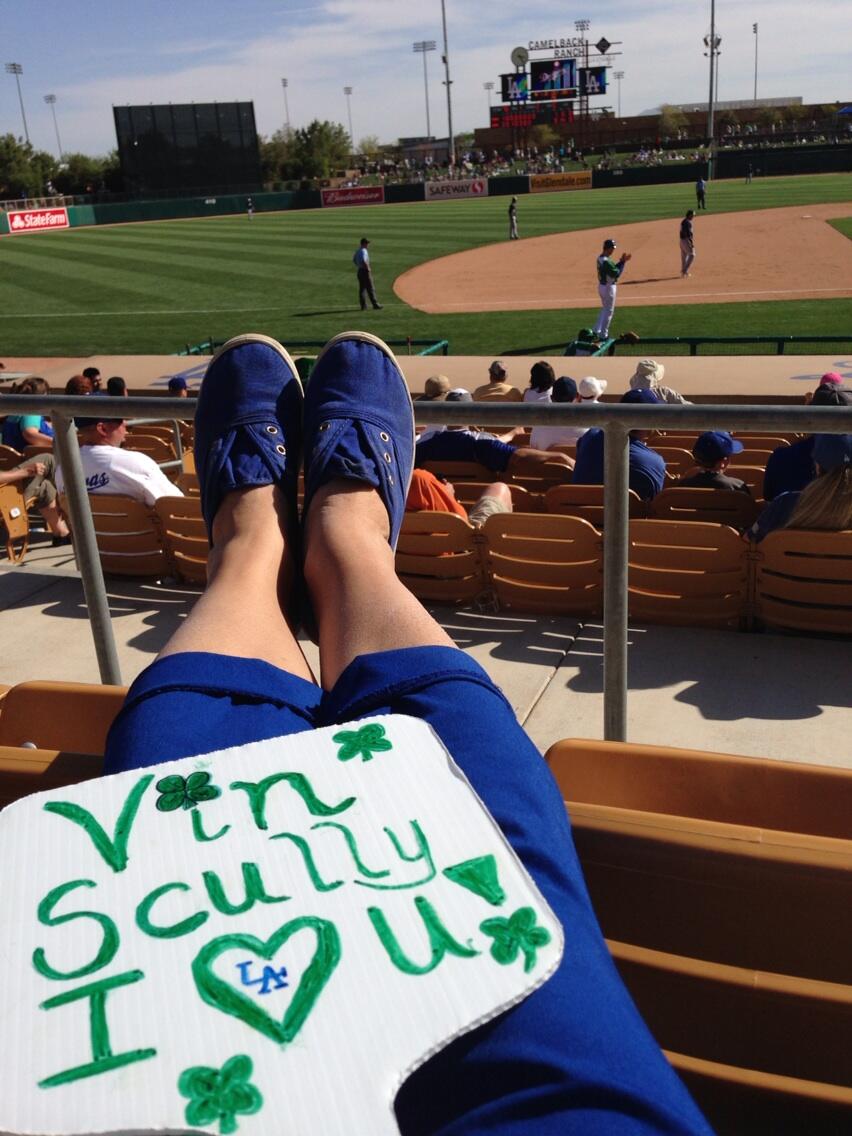 Relaxing at the game

Elisa’s beautiful panoramic pictures.  She showed me how to take them too.  That is me walking with my Trayvon Robinson green jersey and my floppy hat

I like this picture with Lore and I walking

Speaking of traditions, I was disappointed that Jaime Jarrin, Pepe Yniguez & Fernando Valenzuela were not broadcasting the game in Spanish for St Patrick’s Day.  Our Irish poet Vin Scully was there so why not our Spanish poet Jaime?   I asked Mr. Jarrin when was the last time he missed a St Patrick’s game.  He said:

translation:  “emmita: I never missed a St Patrick since 59 to 2008.  In the last six years I have missed one at Camelback Ranch.  Hugs”
Is a shame that this year the broadcasting transmissions are less.

These are Dodgers minor leaguers running during Spring Training.  I like this picture because it depicts the minor leaguers fighting to make it to the Majors.

Like Cristina Saralegui says in that Cuban expression “Pa’lante, pa’lante, pa’tras ni pa’ coger impulso”   which means “Forward,  don’t step back, not even to gain momentum (coud also be understood as “to get a running start”.)

That is my advice to the minor leaguers.  Pa’lante muchachos! Spring forward!

First Spring Training game for the Dodgers today!   Baseball is back!  Pa’lante todos mis muchachos!   Good luck to all the guys new ones, old ones and those struggling to make the team!  Pa’lante!

My first time participating in the Weekly Photo Challenge with a theme.  This week’s challenge is a picture that says  FORWARD

Best news ever this morning!! Sandy Koufax is back with the Dodgers!!! 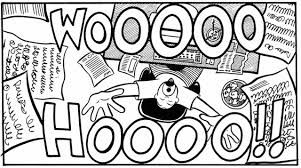 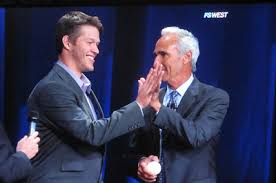 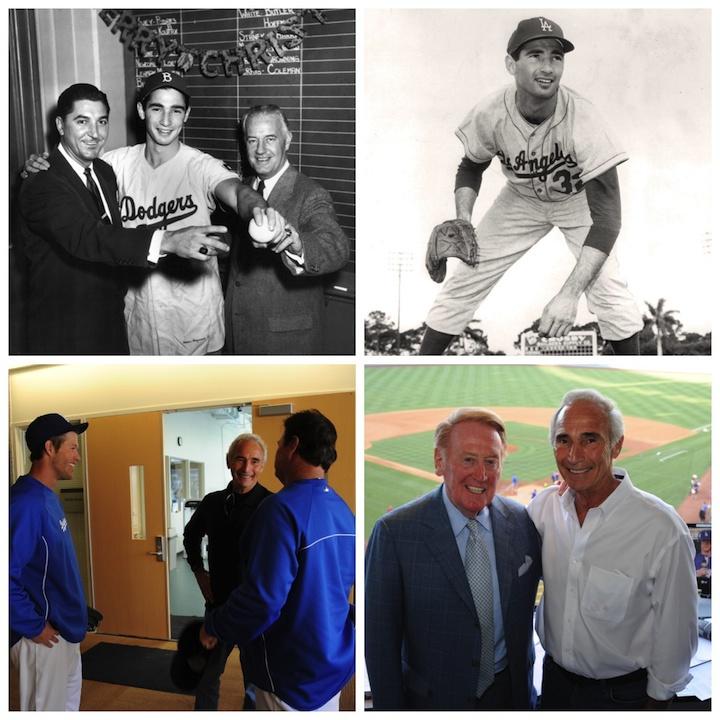 Ace up their sleeves: @Dodgers to be joined by Sandy Koufax at #SpringTraining: http://atmlb.com/XwT4pO

Dodgers to be joined by Koufax at Spring Training

The Dodgers, who will take eight starting pitchers to Spring Training next month, will also take the greatest pitcher in franchise history.

When Lorena and I found out that there was going to be a Spring Traning Fanfest 3/3/12,  we said “Let’s go!”  Rosie, who we met on Twitter last year said “I want to go!”  The original plan was to go for the day.   We already had a Spring Training road trip planned for the St Patrick weekend so we thought a turnaround trip would be OK.

On  Saturday 2/25 I get a text from Lorena that Amanda was joining.   A few days later Lorena tells us her friend Priscila is also joining us.   Our group had grown to FIVE.

After thinking it over, we thought the original plan was kinda crazy to drive from LA to AZ and come back the same night so we changed it stay Saturday night.

The buz at Camelback Ranch the day before we were to leave was that Sandy Koufax was there!   Dodger fans were giddy with excitment.

Because of Sandy Koufax was at Camelback Ranch, our group grew to seven a few hours  before we were scheduled to take off.  Needless to say some of us hardly got any sleep or none at all.

The minivan arrived at my house about 2 AM.   A few minutes later Rosie was dropped off at my house.  Because of a mixup, Rosie did not bring anything but her purse.  She thought we had changed back to making the trip a turnaround trip.   She wanted to stay but we said “There is a Target,  close by…. ”  So off we went six women and a men in a Blue Minivan.

Here is Rene practicing hitchhiking just in case we left them behind.  The perfect place would have been here

We arrived safely and it was off to taking pictures.   The first one I took was with Gaylord Perry

The second one was with Javy!

Here is Rene and I talking with Jon SooHoo

This picture taken by Dodger main photographer Jon SooHoo, appeared in the Dodgers Photo Gallery.  Thanks Jon!   .  Check out his MLB blog at http://dodgersphotog.mlblogs.com

With Manny Mota on his bicycle

Plenty of pictures were taking especially at Sattle Ranch where 3 of the group rode the mechanical bull but I’ll leave the pictures for another post or maybe I should check with the group if is OK to post.

I had a wonderful time on this trip.  Can’t wait to be back at Camelback Ranch for St Patrick weekend.  The only thing is I won’t be able to watch the game on Sunday as I am scheduled to work in NH the following week so I am taking a flight at noon.

My friends Lorena, Rosie, Amanda and I are waking up pretty early on Saturday to head to the Dodgers White Sox Spring Training Fanfest March 3rd.   Hmm, let’s see…gates open at 8;30, a six hour drive.  Man!  that is pretty early and this is a turnaround trip.

Here is the information

Activities & Promotions:
Concourse Activities include the Free Agent Sports Marketing Sports Card and Memorabilia Show, speed pitch, fan photos, kids’ inflatables, a Phoenix Coyotes booth featuring Howler, a Glendale fire truck, and a Cactus League book signing with Hall of Fame pitcher Gaylord Perry.
Promotional items include bobbleheads (first 250 children 12 and under), Coyotes ticket drawing for the March 3rd game at neighboring Jobing.com Arena, spring training raffles, and other sponsored giveaways.
Arizona Sports 620 Radio will broadcast from the stadium during the event.
Concession stands and the Clubhouse Store will be open.
The ticket office will be open from 8:30am-4pm for fans to purchase game tickets.

Phone: (623) 302-5000
Event url: www.camelbackranchbaseball.com
Here is a picture from last March at Camelback Ranch.  Andre Ethier, Margie, Lorena and I.

Had a great time at the Baseball Reliquary event last Saturday.  I purchased the book “Strrr-ike!! Emmett Ashford, Major League Umpire” by Adrienne Cherie Ashford, daughter of Emmett.   I checked out two  books from the library, one on the Negro League and the other is  “A Strong Right Arm”  the story of Mamie “Peanut” Johnson.”
I also won another book.  “Bat Boy: My True Life Adventures Coming of Age with the New York Yankees by Matthew McGough.  Matthew was in the audience so he signed my book.  He was there with his two beautiful young kids.  Even though I have the book I will attend the Baseball Reliquary when he will be speaking about his book and having a book signing.   My friend Abby who is a huge Yankee fan, said is a fun read.   Thank you Abby for the two Dodger books you have sent me!   Let me know if there is anything I can send your way.
I plan on getting the Gaylord Perry book too.  So many books to read, so little time.  I plan on reading on my way to Camelback Ranch.
.

Margie getting her baseball autograph by Tommy Lasorda

Dylan Hernandez of the LA Times.

Tommy Lasorda greeting the umpires.  He then went inside the dugout, spend a few innings there then went slowly up the stairs.  Next thing I knew he was upstairs in the booth being interviewed

Matt Kemp, DeJesus next to him while Trayvon Robinson is at bat

Kershaw pitching while Juan Pierre is on third base