The Dodgers Holiday tour starts Saturday November 16! Woohoo! The closest locations to me are the Santa Anita mall & the West Covina mall. 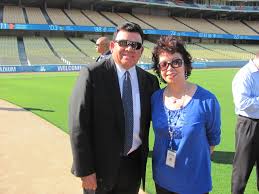 Here is the Dodgers Press Release:

LOS ANGELES — The Los Angeles Dodgers Holiday Tour will be visiting Southern California malls for the second consecutive year in order to encourage fans to give the gift of Dodger baseball. Starting Saturday, November 16 at Westfield Culver City, Dodger alumni Steve Yeager (11:00 a.m. – 1:00 p.m.) and Maury Wills (2:00 p.m. – 4:00 p.m.) will be on hand for a meet-and-greet and autograph session. Westfield Culver City is located at 6000 Sepulveda Blvd, Culver City, 90230. Complete details and the most up to date information on the Los Angeles Dodgers Holiday Tour can be found by visiting http://www.dodgers.com/malltour.

The Dodgers will be on site at each location from 11:00 a.m. to 4:00 p.m. Autograph session timings will vary and will be announced prior to each stop. All appearances are subject to change. There will also be crafts for kids and other family friendly activities.

Holiday gifts including 2014 mini plans and season tickets starting at just $5 per seat per game will be available for purchase. Information can be found at http://www.dodgers.com/seasontickets or by calling 323-DODGERS. Fans that purchase a mini plan or season tickets will receive a gift with purchase

The day that Dodgers Pitchers and Catchers report is finally here!    WOOHOO!!

Dodgers photographer and owner of the MLB blog http://dodgersphotog.mlblogs.com/ Jon SooHoo posted this picture from Camelback Ranch two years ago with the caption “What awaits the Dodgers at the end of the rainbow this season?”  That applies even more now.

Here is a picture from 2004 P&C at Vero Beach.   Greg Miller, Tom Martin, Hong-chih Kuo, and Kaz Isshi.  Good luck in Seattle Kuo.  We will miss you.

In addition to being P&C Day today is Marty Gras or Fat Tuesday.  A day to feast before Lent starts.   It is also called “Shrove Tuesday” or  Pancake Day in the UK.  Pancake day because it was a great way to use the foods that were given up for Lent – milk, butter, and eggs.

An English friend suggested I give up Baseball for Lent.  My reaction:   “WHAT!   Are you kidding me!?   “No Way”   I suggested that he gives up Soccer.   I am still working on what I am going to give up.  In the meantime.

44 Days till Dodgers Opening Game at Petco Park (A Padre fan at the Kings game asked me why I was going to Petco Park on Opening Day and if I was a Padre fan.  I was dressed with my Dodger poncho.  lol.  He did not know the Padres open against the Dodgers)

Question:  Anyone knows if any team has shown interest on Free Agent Aaron Miles?

I went to the Kings Game yesterday as it was Dodger Pride Night.  Here is a picture of my friends and I at the game.  In the picture Enrique, Ernest, Dee, William, Deuce, Sylvia, Rosie, Lorena & I.

Steve Yeager was at the game!

I like this shirt that Ron (Fansince53) was sporting at the game.

Later on today I am heading to  The Baseball Reliquary Presents “Occupy Chavez Ravine:  The “Blue Bum” Paintings of Stephen Seemayer.

“The Last Day of This World?” by Stephen Seemayer (24” x 24,” aerosol enamel, latex, and photo collage on wood panel). Created for Dodgers/Padres series of September 23-25, 2011. On display in the exhibition, Occupy Chavez Ravine: The “Blue Bum” Paintings of Stephen Seemayer.

The exhibition at the West Covina Library has been there since February 4th and will be there until March 29, 2012.   Steve is part of the Top Deck Season ticket holder family.   Go see the exhibition and become a member of the Baseball Reliquary.   Information about event here:  http://www.baseballreliquary.org/OccupyChavezRavine.htm   Also check out Steve’s website here http://www.labluebum.com/

Location: West Covina Library
Address: 1601 West Covina Parkway, West Covina, California
I love all these events at the libraries!    Here is a picture of Terry Cannon, the President and founder of the Reliquary and Stephen Seemayer.  We are the Los Angeles Archives Bazaar at the Doheny Library, USC.

One of Steve’s paintings with Haiku from a game against the Angels:

Come and check out the exhibition today and meet Steve or go to the West Covina another day to check it out.