When the Dodgers posted the first picture of Sandy Koufax suit up in Dodger Blue, I got excited!  I had seen him Sunday at Camelback Ranch with a white long sleeve t-shirt and jogging pants.   Unfortunately we had to leave Sunday so we did not get to see him Monday all dressed in Dodger Blue.  But that is OK, just seeing the pictures,  I got super excited.  I could not wipe a big smile off my face while I work on President’s Day.

The pictures below are from Dodger photographer Jon SooHoo who does an excellent  job.  check out all the photos here:

Sandy Koufax greeted with applauses in the clubhouse at Camelback Ranch 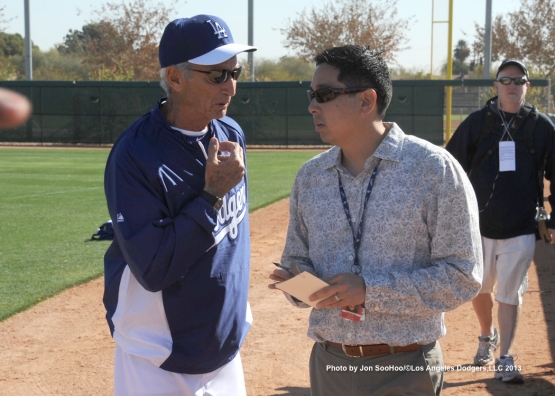 Shimada, the ever young Jim Hill and Sandy Koufax having a good laugh.  This last picture is my favorite because Sandy looks happy.

We are smiling and laughing with joy seeing Sandy back wearing Dodger Blue. 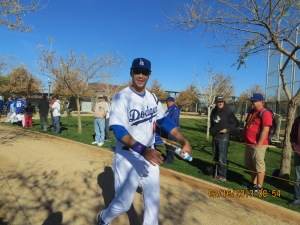 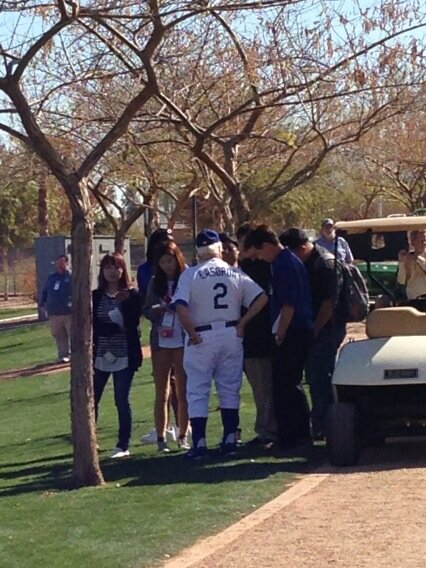 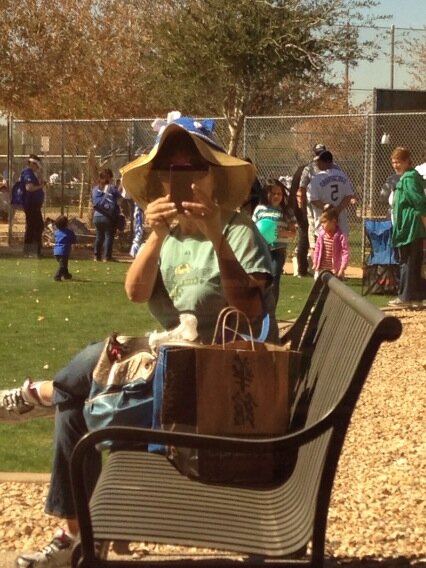 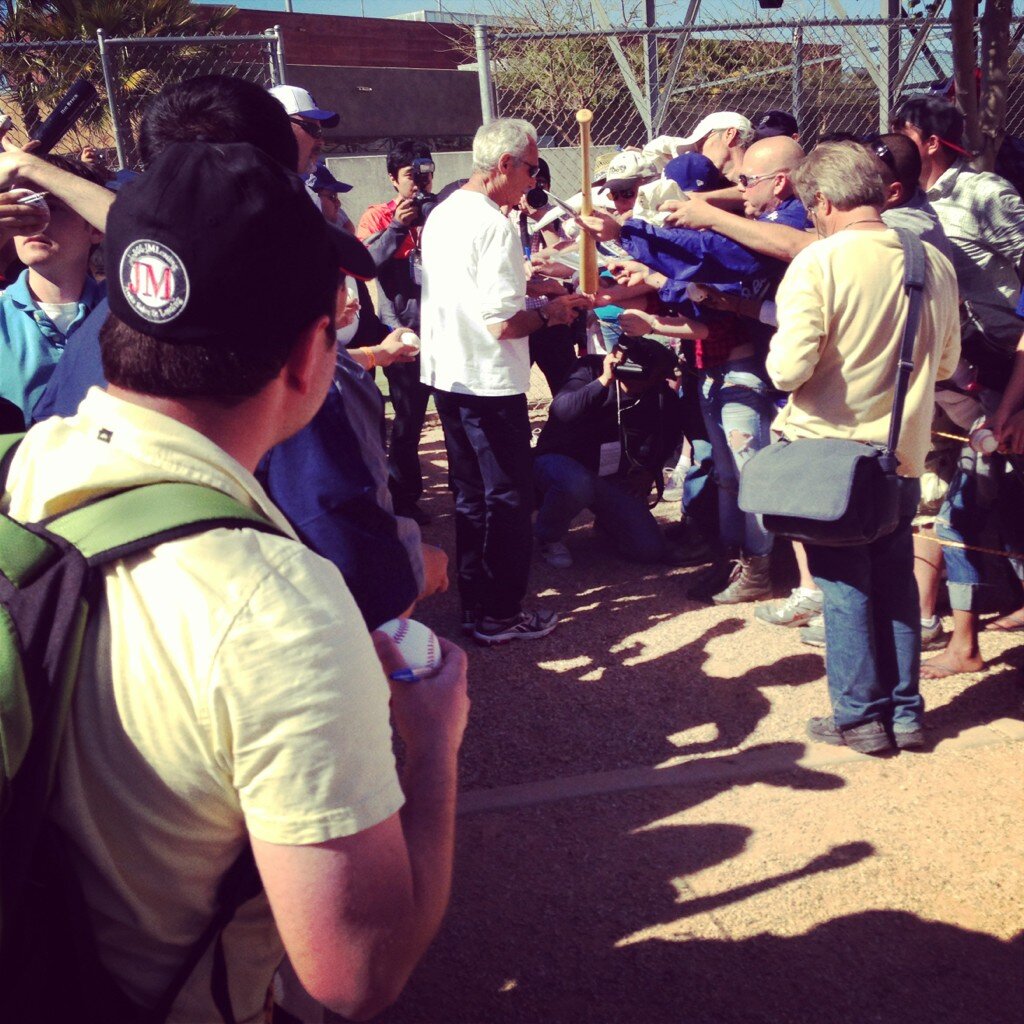 Here is the updated list with a new column for Uniform number:

Have you ever noticed the Sunset Boulevard sidewalk plaques in Echo Park?

I first noticed them a  few years back when I was meeting friends at Barragans on Sunset boulevard on a Sunday before the Dodger game.

The plaques are all sports related.   I took pictures back then but never used them in a blog post.    I asked several people  at the stadium, and other people like Terry Cannon but no one could tell me anything about them.

When did they started appearing?   Who put them there?

There are not all baseball.  Here is Elgin Baylor’s plaque

But who put this together?

Then I found this plaque

Castle happened to be the owner of both a small camera shop and a big dream.

His dream was to improve the struggling commercial center of Echo Park along Sunset Boulevard, maybe even transform it into a tourist attraction. With Dodger Stadium just a 10-minute walk up the hill, what better way to do that, he thought, than to shine some reflected glory of sports heroes down on the relatively unglamorous street of shoe stores, banks, bakeries and restaurants?

So, at Castle’s urging, the City of Los Angeles in 1974 declared the 10 blocks of Sunset Boulevard between Elysian Park Boulevard and Alvarado Street to be the Avenue of the Athletes, allowing sidewalks to be dotted with tablets bearing the names of superstar jocks. Castle himself hardly fit that image: At the time, he was a short, slow-moving, elderly man.

Castle, who also worked as a photographer for the Dodgers, got the team and other local merchants to back the project financially. The first plaques were laid in concrete in 1976 during what was supposed to be an annual ceremony.

But Castle died two years later and the Avenue almost died with him. The ceremonies stopped and the designs for the plaques were even lost for a while. It was not until 1980 that the Echo Park Chamber of Commerce was able to revive the project, which even its biggest boosters concede has yet to fulfill Castle’s dream.

Fred Claire is quoted in the article :

“The most important thing is whether you are really going to try to improve the area,” said Fred Claire, executive vice president of the Dodgers and a member of the plaque committee. “Andy Castle dreamed that it could be clean, that it could be free of crime. What the reality is, I don’t know for sure. But his dream lives on.”

Castle gets his plaque:

To symbolize that, a plaque bearing Castle’s name was laid in concrete last week in front of the store he used to own at Logan Street and Sunset,  Castle’s shows a camera.

So on June 8, 2012 Kevin Millwood and five Seattle relief pitchers tossed a no hitter. The no-hitter witnessed by my friends and I at Safeco Field, tied the major league record for most pitchers used in a no-hitter.

Can you imagine that after the game I found another ticket a “fan” dropped and found several paper tickets on the floor. It could have looked for more. Here is my ticket:

The last time the Dodgers went hitless in nine innings was against the Atlanta Braves’ Kent Mercker at Dodger Stadium on April 8, 1994.

We will be back today Saturday when Kershaw goes to the mound. It is a FOX game of the week. I hope the Boys in Blue hit.

I arrived at the first Dodger FanFest at noon. There were a lot of people there waiting for the gates to open. The first thing I did was have my baseball card made. This is my third baseball card but this one has the Dodger schedule in the back. The next thing I did was the Dodger flip book. Basically you put a glove on and pose for pictures pitching, catching while the camera rolls and they make that into a tiny book.

It was already hot so when I saw sosmeone with a paper fan with half of Matt Kemp’s face, I asked where they got it. It is KCAL CBS sponsored with their broadcast schedule in the back. They gave you three rubber baseballs and if you made it thru the big hole you got the fan. If you made it thru the smaller hole you got Dodger tickets. I wanted the fan but I only came close. Lucky for me my brother Victor was with me. He aimed for the big hole and got me my fan! How do I look?

When Mattingly was on stage, I went to the mike and asked him what Lilly had done to get tossed in Chicago. Also I said on the Mike while wearing my Vote for AJ Ellis button (I took the image from MikeSciosciatragicillness blog and glued it to one of my buttons. Mattingly said “yes, I am voting for AJ.

Here is Matt Kemp on stage being interviewed and taking questions.

The longest Dodger infield was missing the iron man Steve Garvey. He had an emergency so only Russell, Cey and Lopes were there. I thanked them for 1981 which was my first year as a season ticket holder and told Lopes that back in 1981 I had given Bobby Welch a greeting card to make him feel better because he was not doing well. He said something like “you don’t know how much we appreciate that when we are not doing well..” That year in December 1981 I received a postcard from Lopes thanking me for my support. I still have it.

Vin Scully also made it appearance! He talked and we listened only with the “WE Love you Vin!” “No, you are Great!”

Next it was Pepe Yniguez, Fernando Valenzuela & Jaime Jarrin. Pepe funny as usual and even Fernando. Jaime great as always.

Earlier I had gone to the section where the Dodgers had the Tommy Lasorda wine tasting. This section was only for season ticket holders. Later on Tommy was going to walk around talking to fans there posing for picures but I had a conflict since it was the same time Vin Scully was going to be on stage. Anyway, after Pepe, Fernando and Jaime appearace on stage, Tommy followed. He was funny, inspirational and full of Dodger Blue energy. He got the crowd going. I asked him “what kind of food I should have with two bottles of his wine I have at home. He said “Save it!” “And when the Dodgers win the World Series I will drink those bottles of wine with you!” 🙂 Tommy: I got plenty of witnesses!

I left in time to watch some batting practice. Clayton Kershaw pitched a great game. He blanked out the Cardinals 6-0,

From Clif of http://Raysrenegage.mlblogs.com I found this:

I recently heard Zimmer had been absent from his customary seat in the Trop. since right after the first home series against the New York Yankees, I became nervous and anxious. I have come to find out Zimmer has been has been hospitalized in the last week with a kidney condition and will soon begin the dialysis process. I came to find out “The Zim” has been hospitalized 3 times in the last 5 weeks for diabetic related ailments,

Zimmer’s son Tom offered a nugget of future hope today when talking about Zim again taking his rightful spot again in Tropicana Field. “Once his Father gets comfortable with the dialysis schedule and routine he should be back with the Rays”.

Get well Zim. You got all of baseball rooting for you.
Here is a picture Jon SooHoo posted in his blog http://dodgersphotog.mlblogs.com from 1990. Don Zimmer, Tommy Lasorda & Harry Caray.

Is been so long since I’ve seen a “skinny” Lasorda. Do some of you remember when he was on that Slim Fast diet?

Dodgers come back Monday to play the Giants. I will be a “Tour Guide” for a returning soldier that is making his dream a reality to travel to all 30 stadiums. He should be at Dodger Stadium on Wednesday. I will tell you more about later. His blog is at http://baseballdreamin.blogspot.com/2012/02/trip.html

Today February 15th is Ron Cey’s 64th birthday.   I was looking for a picture of the Penguin and I but I could not find any.  I’ve taken pictures of him with other players but not of him by himself and I could not find one with me.  I know somewhere I do have some.  I need to organize my pictures.

Here is a picture of Ron Cey with his kids.

And here he is two years ago with Vin Scully and Tommy Lasorda:

Here is a picture I took July 2010 at the Steve Garvey Celebrity Softball game.  I was invited by Mike who also has season tickets in my section.

a while ago here http://crzblue.mlblogs.com/2010/11/11/third-base-has-been-very-very-cold-to-the-dodgers/ I wrote a post saying that Ron Cey never won a gold glove, not because he did not deserve one but he played during Mike Schmidt tenure.  So here is a glove for you Ron!  Is not gold but is chocolate!

Margie getting her baseball autograph by Tommy Lasorda 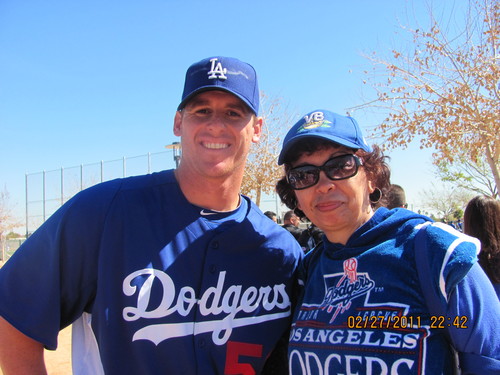 Dylan Hernandez of the LA Times.

Tommy Lasorda greeting the umpires.  He then went inside the dugout, spend a few innings there then went slowly up the stairs.  Next thing I knew he was upstairs in the booth being interviewed 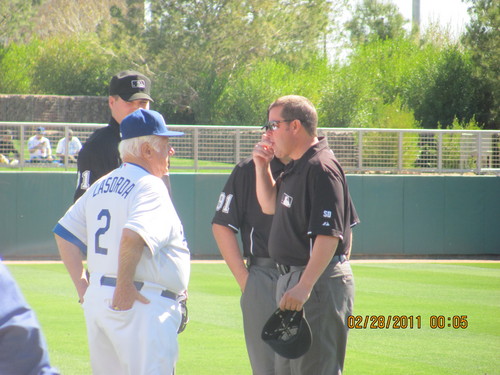 Matt Kemp, DeJesus next to him while Trayvon Robinson is at bat

Kershaw pitching while Juan Pierre is on third base 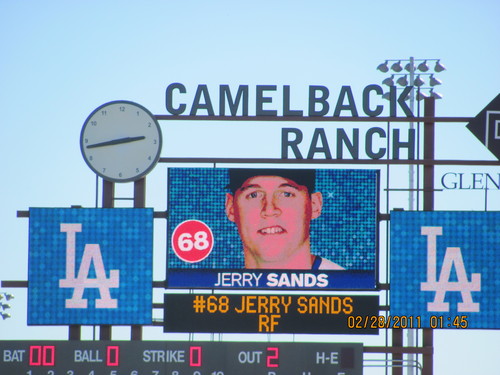