Today February 15th is Ron Cey’s 64th birthday.   I was looking for a picture of the Penguin and I but I could not find any.  I’ve taken pictures of him with other players but not of him by himself and I could not find one with me.  I know somewhere I do have some.  I need to organize my pictures.

Here is a picture of Ron Cey with his kids.

And here he is two years ago with Vin Scully and Tommy Lasorda:

Here is a picture I took July 2010 at the Steve Garvey Celebrity Softball game.  I was invited by Mike who also has season tickets in my section. 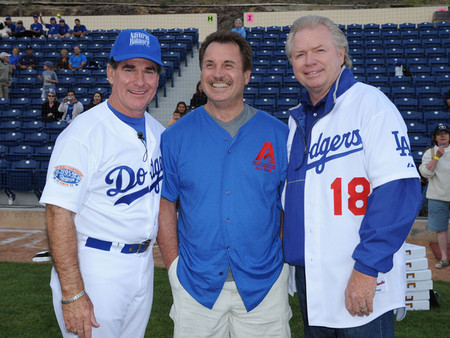 a while ago here http://crzblue.mlblogs.com/2010/11/11/third-base-has-been-very-very-cold-to-the-dodgers/ I wrote a post saying that Ron Cey never won a gold glove, not because he did not deserve one but he played during Mike Schmidt tenure.  So here is a glove for you Ron!  Is not gold but is chocolate!