Yasiel Puig made a special appearance at Viva Los Dodgers on June 1, 2014.   Yasiel was there to support the Lou Costello Recreation Center in Boyle Heights.  For a monetary donation, you could take a picture with him.   The lines were long.  Lucky, Lorena and I arrived early but we still waited close to 2 hours in line. 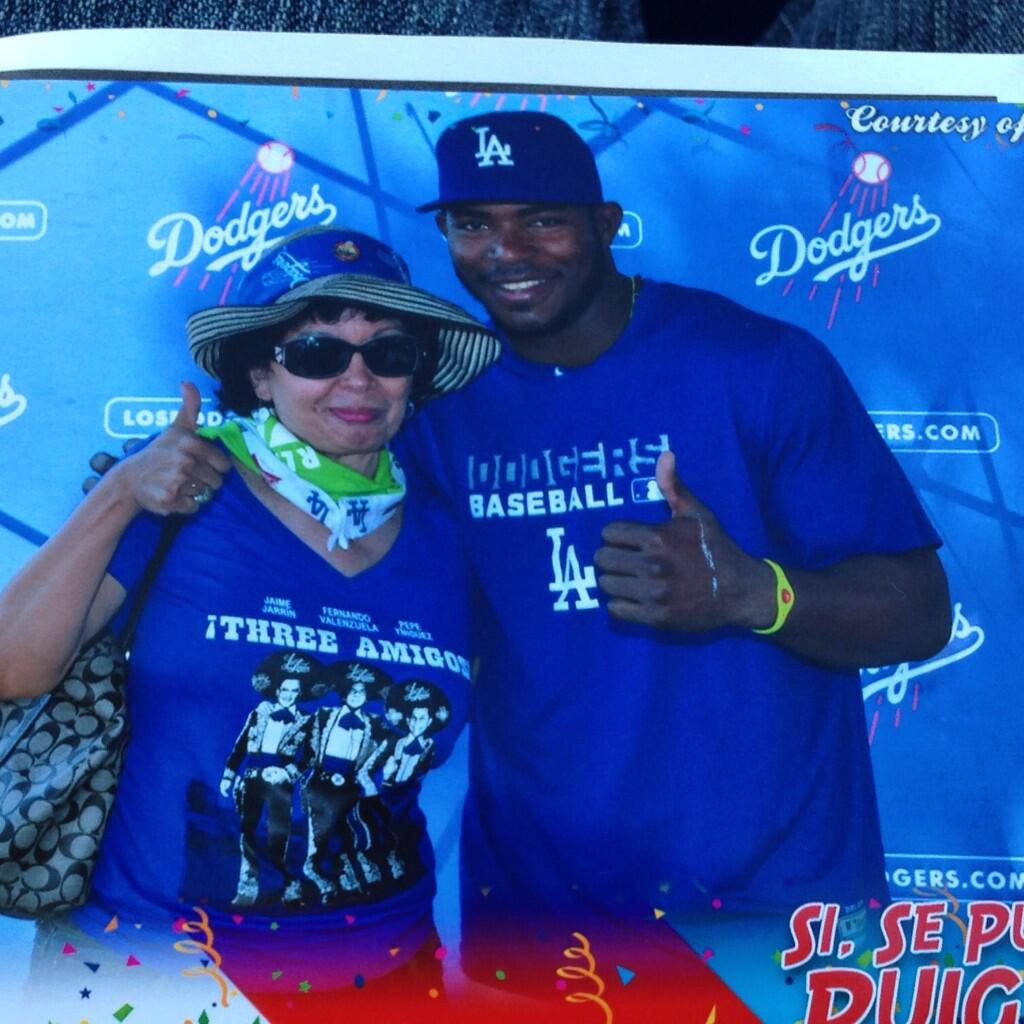 When I got to the front this is how our short conversation in Spanish went:

Me:  “Do you still think the same of all the women?”

Me:  You told us in San Diego that all the women are the same”

At this point he laughed and hugged me.   Lorena was next and I said “Do you remember us?”    Puig said “Yes!  Where is the other one?”  The other one being Rosie who was with us in San Diego when we had a nice little chat with Puig.  We told Yasiel that Rosie could not make it but that we will see him in San Diego.

Here is the video that the Dodgers put online:

We had a great time with Puig at Viva and we donated to a good cause.   Both times I have found Puig humble, playfull and eager to donate his time to help kids in need.  Last year when we encountered him in San Diego, after our little chat,  he was heading to a local hospital to cheer some kids.

Congratulations to Yasiel Puig on his first anniversary today June 3, 2014.  It was a year ago today that he debuted with the Dodgers.   And Congratulations Yasiel on moving from 5th to 1st in the All-Star Game balloting.   Also Felicidades Yaseil on being named the MLB National League Player of the Month!   Well deserved!   VivaPuig!  VotePuig!

I am late to the party like always!  But I still wanted to do the Weekly Photo Challenge on Culture. http://dailypost.wordpress.com/2013/04/26/photo-challenge-culture/

I like the diversity of cultures in Los Angeles so with that in mind I am posting these pictures:

At one of the Viva Los Dodgers festivals at Dodger Stadium.

Our friend James with his two sons 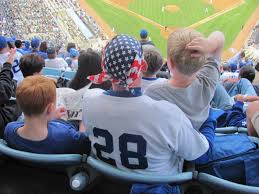 With amigos at Dodger Stadium all decked out in our Dodgers ponchos. 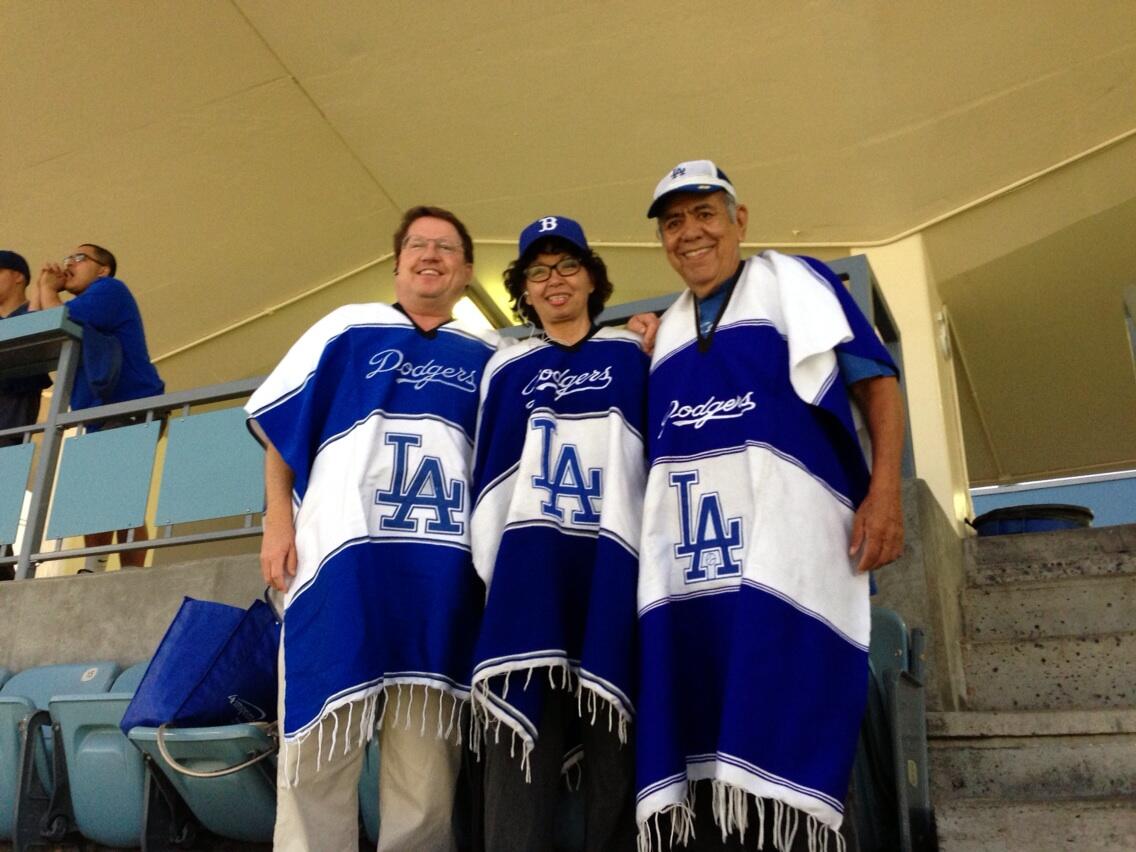 Today is like Jaime Jarrin says “La mamacita de las fiestas”  The mother of all the Viva Los Dodgers fiestas.   Gates open at 1:30.  There are lots of autograph opportunities at La Gran Fiesta.   The autograph will start at 2 p.m. with Adrian Gonzalez, Luis Cruz and Hanley Ramirez.   I am aiming to be there at 1:30.  Hopefully I get to talk to El Cochito

Fernando Valenzuela, Pepe Yniguez and Jaime Jarrin will also be signing  I hope Fernando signs something for me like maybe my ticket from Opening Day in 1981 or this picture

Manny Mota being honored for his 50 years in MLB

In june, 1969, Dodger Vice President Al Campanis pulled of of his greatest deals when he traded for Manny Mota and Maury Wills, giving up Ron Fairly and Paul Popovich in exchange.  In late July of that year, Mota delivered his fist pinch hit in a Dodger uniform.

From the Cactus League book above.  Manny Mota, a rookie with the Houston Colt 45s, poses in front of Geronimo Park in Apache Junction.  Looking forward to the Gran Fiesta and Manny Mota being honored!

The Dodgers are going into San Diego with a 3-3 road trip record in this their final road trip.   They saw the Nationals and the Reds celebrate winning their division.    I believe this is the first time that I am on the road seeing another team celebrating.

I got this note from Vic Salazar:

Buy discounted tickets for the Padres vs Dodgers series September 25, 26 and 27 at Petco Park .
The discounted tickets are being offered through the Padres Community Partnership with the Chicano Federation of San Diego County. Every ticket sold will benefit the Chicano Federation’s important social services.
Use this link: http://www.padres.com/promo Promotion code: Chicano Tickets for the Dodgers series range between $13-$28

I am looking forward to the last Dodger homestand  with three games with  Colorado Rockies and then the  Giants are in town for three.  Here is what is coming up at Dodger Stadium:

The Friday night fireworks will be set to the music of Frank Sinatra.   Dodgers will be celebrating Tommy Lasorda and Sweet Lou’s birthday which was September 22nd.

Saturday is the Gran Fiesta.  The final Viva Los Dodgers.     The game time  has been changed to 6:10 pm.   The Gran Fiesta will start four hours before.     Also Pepe Yniguez told me that Manny Mota will be honored for his 50 year Baseball Anniversary!   Felicidades Manny!   Te queremos mucho!

It seems not long ago that picture was taken but it was Spring Training when you can see Manny Mota riding his bike.

Fan Appreciation Day on Sunday.  For those traveling down the 405 Freeway, don’t forget is Carmageddon weekend.

Dodgers close the regular season with three games with the Giants starting Monday.  Wednesday’s game has a rare start of 4:15 pm.

First of all, here are my nieces Kirsten and Krystal.    I took them to the Kids corral where kids and adults too might get autographs if the kids ask nicely.    It was a hot day in the middle of the summer.

I love you girls!

I was driving to work when I spotted this bus so I chased it down until I could take a picture.  I have another picture that I wa closer but I like this one where you can see a little of a mountain in the background.   It startled me that I got too close..  i

From the Viva Los Dodgers festival.  “ESTA ES MI CIUDAD” means “THIS IS MY TOWN”, the theme for 2009.

This is Dee.  Check out her Vin Scully tatoo!  It was done by Trublue, a tatoo parlor owned by a die hard Dodger fan.

So far this homestand we are 2-3.  Not good.   We split the four game series with Arizona.  I really thought we would take the series.

One of the best things of the D’backs being in town is getting to see Kirk Gibson.

Gibby is so nice that he comes over to the Kid’s corral and signs for us fans.  Last year the D’backs happen to be in town during the 80’s celebration day.  Kirk Gibson took the time to show up at the 80’s luncheon held in the Club Level restaurant.   We had quite a few players from the 80’s  but the big surprise was Gibson.   Gibby mentioned that it be nice if the seat where his famous 88 World Series landed be marked with his name.   Now, wouldn’t that be nice to honor Gibby?

When I got to the stadium and saw the matchup on the scoreboard of LeBlanc with a 9.75 ERA, I thought for sure my Dodgers can win BUT instead it was a frustrating loss.  Dodgers were blanked out by the score of 2-0.   UGH!  Ten men were left on base.    Pathetic display!  Clayton Kershaw has had 8 runs support in his last 9 starts.  Just pathetic hitting lately.   I still can’t believe it!  Zip, nothing, nada zero runs.   Oh, I almost forgot the two errors in the same play.   Just pathetic.

Randy Wolf goes Saturday!  Hopefully the wolfman can restore order and be the stopper he has been lately.

I have been attending a few of these events in the past. There is music, games for kids, vendor booths from Dodger sponsors with giveaways an contests.   Also there is autgraph booths with players rotating in the booths.  Jaime Jarrin, Fernando Valenzuela and Pepe Yniquez also participate in this event.

The game will start at it scheduled time of 7:10 p.m. so for us that are going to both the festival and the game it will a long day/night at the stadium.

Tomorrow is also another segment of “This is my Town”.   This time is to honor the Mexican community so the shirt will be in Spanish  “Esta es my Ciudad”   Buying tickets in this section entitles you to the t-shirt and an  All you can eat.  The menu includes guesadillas, lime chicken, watermelon and the standard nachos, Dodger Dogs, and non-alcoholic drinks.